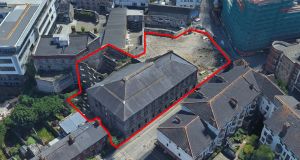 Dubbed 55 Fumbally, the Dublin 8 site is believed to have achieved in the region of €10.5 million, equating to about €47 million per hectare.

Leading Irish developer Oakmount, led by Paddy McKillen jnr and Matt Ryan, has sold a prime site in Dublin 8 to international co-living company The Collective. Dubbed 55 Fumbally, the 0.22 hectare (0.55 acre) site is believed to have achieved in the region of €10.5 million through joint selling agents JLL and Knight Frank, equating to about €47 million per hectare.

Oakmount is believed to have originally paid about €3.96 million for the site in 2017, including all acquisition costs. While it has expended further sums amending the extant planning permission and carrying out demolition works, it has more than doubled its investment in just two years.

In January The Collective announced it had acquired its first “building” in Dublin. It now transpires that the unidentified building in question is in fact Oakmount’s site, which is bounded by New Row South, Blackpitts and Fumbally Lane, the sale of which was completed in recent days. The site has largely been cleared, but a large cut-stone former distillery building, which is a protected structure, remains.

The site is located at the heart of Dublin’s Liberties neighbourhood, which is undergoing a major regeneration. Several large hotel, student accommodation and office developments are planned for the area.

The co-living company has acquired the property with planning permission for a large, mixed-use scheme ranging in heights of up to six storeys incorporating 34 apartments, 26,700sq m of office space (gross), a restaurant and 24 under-croft parking spaces.

The Collective will likely completely redesign that scheme, benefiting from the introduction of various changes in planning regulations enacted since Oakmount secured planning, such as dedicated guidelines for co-living developments and the removal of the cap on building heights, both of which should enable it to deliver a significant number of bedrooms on the site.

As the site is zoned for enterprise and employment uses, the company may also seek to incorporate co-working and other commercial activities into its plans to appease planners.

The co-living concept has come under fire in recent weeks as some Irish politicians and commentators have criticised a planning application lodged by Bartra Capital Property for a 206-bedroom development in Dún Laoghaire, lamenting a purportedly high proportion of rooms per shared kitchen and living room, among other supposed issues.

The Collective will undoubtedly hope to escape such criticisms when it reveals its plans for the Dublin 8 site given the success of its renowned Old Oak development in London, which opened in 2016. The development was the city’s largest co-living scheme with 546 rooms, where residents pay all-inclusive rents that cover the cost of cleaning, utilities, wifi and gym membership among other amenities.

This summer the company plans to trump its Old Oak scheme by launching its second building, billed as the world’s largest co-living scheme, in London’s Canary Wharf with 705 rooms spread over 21-storeys. In September its third development, named the Paper Factory, will open in the New York borough of Queens featuring 125 rooms.

It expects to deliver its Dublin scheme in late 2021, suggesting an anticipated lead-in time of about 2½ years to secure planning permission and to complete construction. The Collective has teamed up with Mm Capital, the Irish property investment and development company headed by Peter Leonard and Derek Poppinga, as its local development partner. Dublin-based Cardinal Capital Group and London-based boutique financier Reditum Capital funded the Dublin site purchase.

It is the first major acquisition by an international co-living company of a Dublin site, but with numerous such firms now seeking sites in Dublin, and The Collective itself interested in adding to its portfolio, it seems inevitable that more sales will follow.