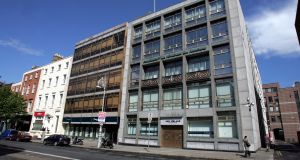 New Ireland Assurance on Dawson Street, Dublin. Sources suggest it could attract bids of about €30m based on its location. Photograph: Matt Kavanagh

Bank of Ireland plans to put its subsidiary New Ireland’s central Dublin headquarters up for sale in coming weeks with a price tag thought to be in the region of €30 million.

The bank has been weighing a sale of New Ireland’s building, just metres away from Stephen’s Green, on Dawson Street in Dublin 2, for some time.

It is understood that the lender decided this week to offer the building for sale on the open market, possibly some time next month.

Property dealer Savills has been tipped as the likely agent and Bank of Ireland has commissioned a feasibility study.

The building will be sold with vacant possession as the insurer intends to move out of the premises at some point this year.

Sources suggest that the New Ireland building could attract bids of about €30 million based on its location in the heart of Dublin’s central business district.

The move should draw huge interest from property players, as Dawson Street has been a focus of activity for some time.

Directly across the road on the same junction, property fund Iput pre-let a building to US on-line retailer and Walmart subsidiary, Jet. com, for €1.8 million a-year, or €60 a sq ft.

New Ireland’s building is about 60,000sq ft, twice the size of the premises that Iput let to Jet, indicating that it could attract rent of more than €3.5 million a year at current rates.

Green, Hibernia Reit and Iput are all considered likely to run the rule over a premises on that scale in Dublin city centre.

New Ireland sells pensions, insurance and investments through a network of brokers.

The company says that it was managing more than €16 billion on behalf of clients at the end of last June.

Bank of Ireland would not comment on its plans for the Dawson Street building on Wednesday.