Avolon to let 75,000sq ft in One Ballsbridge development 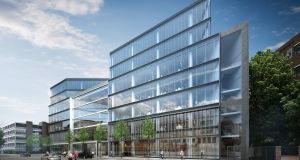 * A stylish new development nearing completion in Ballsbridge, Dublin 4, looks set to become one of the key venues for Ireland’s thriving aircraft-leasing business.

The largest of the three blocks being developed by the Comer Group at Number One Ballsbridge is to be let entirely to Avolon, one of the world’s leading aircraft lessors.

Two individual floors, each extending to 278sq m (3,000sq ft), in another block will also be let to aircraft leasing companies.

Aisling Tannam of letting agent Cushman & Wakefield said One Ballsbridge appealed especially to aircraft leasing companies because two of the blocks offered “brand new space with 3,000sq ft floor plates, which are extremely difficult to find in the Dublin market”.

Individual floors have also been let to CMIG Aviation, part of the China Minsheng Group, and a second aircraft-leasing company not yet identified. The rents in both cases will be €753/sq m (€70/sq ft).

Avolon is the third largest aircraft leasing company in the world by asset value with an owned, managed and committed fleet of 915 aircraft and offices in the United States, Dubai, Singapore, Hong Kong and Shanghai.

It was controlled by the Irish businessman, Domhnal Slattery, until January 2016, when he sold the company to Chinese aerospace giant Bohai Capital for $2.6 billion (€2.38 billion).

Mr Slattery has since worked from Hong Kong, managing Avolon’s Hong Kong Aviation Capital business. In Dublin, the company’s new office will be within walking distance of his new home on Shrewsbury Road. The house previously belonged to property developer Sean Dunne and Gayle Killilea.

The ground floor of Building 3 will be occupied mainly by an Avoca food outlet and restauranteur Dylan McGrath, who will trade as Shelbourne Social.

Rita Carney, of joint letting agent JLL, said securing Avolon as the flagship tenant for Number One Ballsbridge was a testament to the quality of the development. She said the remaining space in two other adjoining blocks could accommodate requirements from 2,000 to 40,000sq ft (185 to 3,716sq ft).

The joint letting agents are confident that with 62 per cent of the development already committed, little time will be lost on finding tenants for the remaining space.

Avolon was represented by Michael Turley of Turley Property Advisers.

* This article was edited on November 1st