Molton Brown building on Grafton Street for sale for €9m 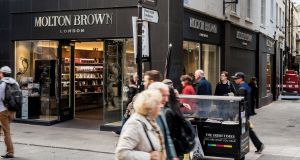 With institutional funds still leading the search for well-located retail investments in Dublin’s south inner city, the likelihood is that one of them will buy the Molton Brown store at 80 Grafton Street, which goes for sale from today.

Kevin Donohue of Cushman & Wakefield is quoting €9 million for the corner store next to Bewley’s Cafe, which has considerable reversionary potential in the run-up to the next rent review in October 2019.

Molton Brown was established in the UK in 1973 and was acquired by the Japanese cosmetics giant Kao in 2005. The standalone cosmetics business reported pre-tax profits of £35 million (€39.2 million) in 2016.

Urban Decay, & Other Stories and Victoria’s Secret have made commitments, though other equally well-known traders seem unwilling to pay over-the-top rents at a time when online sales continue to increase. Still, shop occupancy on the street is running at an impressive 93 per cent, with just four available to let.

Next month’s reopening of the Bewley’s Cafe and the arrival of Victoria’s Secret are expected to give a major boost to business on Grafton Street.

Irish Life has been one of the lucky investors, with sufficient vested interests to change the fortunes of much of the street through its ownership of no fewer than 18 buildings, including its most recent acquisition of the large AIB bank building with frontage on to both Grafton and Wicklow streets.

The fund has been looking at amalgamating some of its adjoining shops.