Nama has funded building of more than 5,500 new homes, it says

State assets agency generated €1.5bn in first half of 2017 mostly in property and loan sales 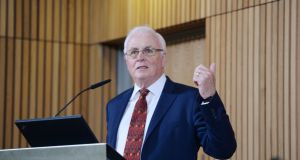 Nama’s Frank Daly says the agency has exceeded its target of 2,000 homes for social housing.

State assets agency Nama had funded the building of more than 5,500 new homes up to the end of last month, according to its latest figures.

The agency’s quarterly report to Minister for Finance Paschal Donohoe, shows that it generated a total of €1.5 billion in cash in the six months ended June 30th.

Nama has been providing funds to debtors to build new homes since 2014 as part of the Government’s efforts to tackle the Republic’s housing crisis.

Its chairman Frank Daly and chief executive Brendan McDonagh point out in the report that the agency funded the construction of more than 5,500 homes from the beginning of 2014 to the end of September 2017.

Another 9,300 are either being built or have planning permission. The agency has sites for a further 10,000 houses and apartments and its clients are either seeking permission to build on them or will do so within a year.

By the end of June, Nama had identified 6,946 properties suitable for social housing. It had handed over 2,398 of them to local councils, which needed a total of 2,780 homes.

Those homes not required by councils remain in the hands of Nama debtors, many of whom are renting them out and using the income to repay their liabilities to the agency.

The report shows that Nama generated €1.44 billion from property and loan sales during the first six months of the year. Borrowers paid the agency almost €60 million, bringing the total amount of cash generated to €1.5 billion.

Nama’s sales produced €5 billion in cash last year, but the agency has slowed the rate at which it is disposing of assets as it has fewer of them.

One of its larger sales in 2017 was Project Tolka, a group of loans due from developers including John Flynn, Paddy Kelly and the McCormack family. It was sold to US-based Colony Capital for €455 million.

The agency had generated €39.8 billion in cash between its foundation and August 31st. Nama’s figures show it generated a further €100 million between the end of June and the end of August.

Profits for the first six months of the year were €195 million. Nama earned €5.5 billion in profits through 2016, aided by the sale of loans. The slowdown in sales also affects its profits.

Nama spent €31.8 billion buying property loans from the Republic’s banks to help rid their balance sheets of bad debts to ensure their survival. It has sold most of those debts to overseas investors.

The organisation has repaid all of its own €30 billion senior debt, which was guaranteed by the State. It still owes €1.6 billion but the State is not guaranteeing that liability.

1 Wild Geese: Ufurnish co-founder Deirdre McGettrick
2 Coronavirus: We must save lives but we also need to live
3 Grounded Aer Lingus pilots develop fix for turnaround glitches
4 Moving in and out of lockdown is a recipe for economic disaster
5 Brown Thomas job cuts; sandwiches and Covid; and Ulster Bank’s blues
6 Non-executive directors face new paradigm in the boardroom
7 John FitzGerald: Exchange rate control no panacea for economic crisis
8 Eir customers lose sports content over contractual row with Virgin Media
9 Brown Thomas and Arnotts to cut 15% of jobs due to coronavirus crisis
10 US treasury forced to pay up to fund record stimulus
Real news has value SUBSCRIBE