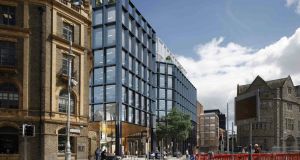 As news emerges of the Marlet Property Group’s reported €56 million purchase from Nama of the former Apollo House site on Tara Street, the developer is one step closer to assembling a unique 1-hectare (2.45-acre) city block at the heart of Dublin’s historic core.

Bounded by Townsend, Tara, Poolbeg and Hawkins streets, the block is one of the most important redevelopment sites in the city, especially given the unusually high building heights for new development that are permissible under the Georges Quay local area plan. Marlet’s latest deal gives it control of some 0.58 hectares (1.43 acres) of the block, with just two sites now falling outside of its control.

Marlet commenced its site assembly in late 2015 with the off-market acquisition of College House, an office block formerly occupied by An Post and owned by the Brennan family of bread-making fame. Just a few months later it acquired the adjoining Screen Cinema from the Dublin Cinema Group, controlled by the Ward family.

The exact purchase prices are unknown, but when Marlet’s purchase of the Apollo House site is included, it is believed that the company has expended more than €100 million to date.

Plans to redevelop the city block have been mooted since 2007, after Garrett Kelleher’s Shelbourne Developments acquired Apollo House from solicitor Damien Tansey, and subsequently acquired an adjoining petrol station and the Long Stone pub.

In September 2007 the Office of Public Works (OPW) agreed terms with Kelleher for a joint venture, which, had the deal proceeded, would have seen the combined sites of Hawkins House and Apollo House redeveloped by Kelleher as offices, with the State to receive a share of the rental income produced by the new block.

The plans never proceeded due to the property market’s collapse, but Kelleher’s acquisition of a number of properties consolidated ownership of the city block, making a future assembly much easier.

Marlet appears to be progressing with the demolition of the Screen Cinema and College House, but it is unlikely to commence construction until it is certain it can assemble the two remaining sites (Hawkins House and The Brokerage), which would necessitate a redesign of the permitted scheme.

The Department of Health vacated Hawkins House over the summer and, having obtained planning permission in July 2017 to redevelop the site, the OPW is in the early stages of organising the demolition of the existing office block. While the OPW was apparently satisfied to dispose of the site a decade ago, judging by its deal with Kelleher, and an earlier attempt to sell the site for €60 million-plus in 2006, its current intentions remain a mystery.

The OPW has displayed an inclination towards renting, rather than building office space of late, such as the letting of Miesian Plaza on Baggot Street to rehouse the Department of Health, and another rumoured potential letting for the Revenue Commissioners at the Dublin Landings development.

Despite this, the OPW might be inclined to redevelop Hawkins House for the State’s use if it anticipates an obvious requirement for office space.

But it will have to make a decision in the near future if it intends to sell, as the site is unlikely to ever be as valuable to Marlet as it is currently.

Based on the price per hectare paid by Marlet for Apollo House, Hawkins House’s larger site could be worth up to €68 million. By acquiring it, the developer can apply for a new planning permission for the entire block and avail of efficiencies of scale, giving it the capacity to pay the OPW a bumper price.

Aside from Hawkins House, it is understood that Marlet has offered to buy out the Brokerage apartments on Townsend Street, of which there are 24 one- and two-bedroom apartments and two commercial units.

According to company documents, the developer purchased one apartment last year for more than €500,000 – well in excess of market value – and it also acquired a ground-floor commercial unit for an undisclosed sum.

Marlet is unlikely to complete a purchase of any more units in the block until all owners have unanimously agreed to sell.

A fourth of the block’s apartments traded hands between 2011 and 2013 for prices ranging from €120,000 to €200,000, while longstanding owners who acquired the units from developer McInerney in 1998 paid prices starting from €140,000, with the benefit of Section 23 tax reliefs. It is believed that many owners have agreed terms for the sale of their units, but agreement is not yet unanimous.

Similar past attempts by other developers to buy out entire apartment schemes, where units are all in separate private ownership, for redevelopment have all failed.

However in this case, owners are likely conscious that Marlet’s offer is a once-off opportunity as The Brokerage occupies a relatively modest site of about 0.06 hectares (0.15 acres) and the high prices offered are based on the potential marriage value that would be unlocked by combining the apartments’ site with Marlet’s adjoining sites.

It will be a major coup if Marlet, led by Pat Crean, and its financial backers, London- based M&G Investments, succeed in acquiring the remaining two sites. The resulting redevelopment will give a fresh lease of life to a city block that has long been neglected. Watch this space.

1 Revenue publishes list of companies tapping State for wage support
2 How long can Government afford to keep State pension age at 66?
3 Bake-off soy sauce tweet backfires for UK trade ministry
4 Developers may need to go back to the drawing board as one-beds fall from favour
5 Trump vs Biden: Stakes are high for the Irish economy
6 Missing Wirecard executive could be Austrian spy, prosecutors say
7 Covid-19 will have a significantly worse impact on UK public finances than on ours
8 Grocery shopping app Buymie delivering for Devan Hughes
9 Tighter regulations for car makers will drive buyers to choose electric
10 Cosgrave Property Group secures exit from Nama
Real news has value SUBSCRIBE