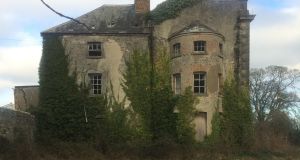 Duleek House, which is listed, is about 25 miles north of Dublin city and airport

A once-grand Georgian house on 18 acres in the centre of Duleek, Co Meath, is rumoured to be under offer at €750,000 through agent Robt B Daly. Five of the 18 acres are zoned residential, 2.7 as tourism, 8.8 as high amenity and the rest as open space.

The agent suggests the property would suit a multiplicity of uses – subject to securing planning permission – such as residential, a tourism project, convalescent home, retirement homes, or hotel.

Duleek House, which is listed, has a limestone-fronted facade which was added in about 1750 to a house probably half a century older. The interior featured an entrance hall with three arched openings giving access to the staircase and reception rooms with neo-classical plasterwork.

The house is in a dilapidated state but has a footprint of 210sq m (2,260sq ft) which over four floors would give 840sq m (9,040sq ft) of space. There is also a courtyard with a range of outbuildings.

Duleek is about 25 miles north of Dublin city and airport. The journey to the capital along the M2 takes about an hour while Drogheda, about a 15-minute drive away, has a rail connection to Dublin.

Under the plans, an existing 1,016sq m (10,940sq ft) warehouse named Grafton House would be razed to make way for the new hotel.

The property was offered for sale by a private equity fund in 2015 as part of a €20 million portfolio dubbed the Sandyford Collection, which failed to sell. Esprit subsequently acquired Grafton House for an undisclosed sum, and separately acquired the Cedarhurst Building about 100m away on Arkle Road, which was marketed for sale at €3.9 million.

The low-rise building occupies a prime 0.26 hectare (0.65 acre) site that could accommodate a building more than four times the size of the existing structure.