Company in talks for at least 120,000sq ft at the Exo Building in city’s north docklands 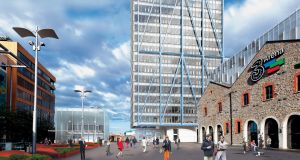 An Post is closing in on a deal to relocate its headquarters from the GPO to the Exo Building at Point Square in the Dublin docklands.

The company is understood to have entered into exclusive negotiations to rent at least 120,000sq ft at the property from its owners, a European fund advised by Tristan Capital Partners and local partners SW3 Capital. The Exo, which is under construction, will comprise 169,150sq ft of Grade A office space upon completion later this year.

Prior to its selection of the building, An Post looked at four other potential locations for its GPO operations, with Ballymore’s Dublin Landings scheme, Bennett Construction’s North Docks development, Oakmount’s Clerys Quarter and Dublin Airport Central all understood to have come in for consideration.

An Post is looking to relocate its headquarters from the GPO to facilitate an extensive refurbishment of the building which famously served as the headquarters for the 1916 Rising. The O’Connell Street property hasn’t been subject to any form of substantive works since the 1980s, and now requires significant mechanical and engineering repairs as well as total interior redesign, according to An Post.

GPO staff had, in recent times, been registering an increasing number of complaints in relation to the building citing difficulties with plumbing, temperature control, overcrowding and air quality.

While An Post’s GPO headquarter operations now look set to be relocated to the Exo Building, its public post office and the GPO Witness History Museum will continue in their current location.

Located on the site of what was to have been Ireland’s tallest building, developer Harry Crosbie’s 120m (394ft) “Watchtower”, the Exo will still, at the lower height of 73m (239ft), be Dublin’s tallest office block.

While Nama provided the initial funding for the 17-storey building’s design and planning permission, the development was acquired in December 2017 from Nama-appointed receivers by a European fund managed by Tristan Capital Partners, and its local operating partners, SW3 Capital.

While no details were provided at the time in relation to the price paid for the Exo site, it is understood the purchasers agreed to provide between € 70 million and €80 million in development finance as part of the forward funding arrangement. The construction of the building is being directed by main contractors, Bennett Construction, while CBRE and Savills are the joint letting agents for the scheme.

The Exo Building has a prime location at Point Square, immediately adjacent to the 3 Arena, which hosts more than 100 concerts a year, in addition to the 252-bedroom Gibson Hotel, Odeon Cinema and numerous food and beverage operators, including Starbucks, Eddie Rockets, Ruby’s, Freshii and Salad Box. Verizon, the US telecommunications company, and Voxpro – global providers of customer experience and technical support solutions – also operate from Point Square.

Located next to the Irish Financial Services Centre (IFSC), Point Square has an immediate population catchment area of more than 115,000 and, with plans under way for the addition of 5,000 new residential units, student accommodation and office developments, this figure is likely to grow significantly. The Exo Building alone will see the addition of 2,000 workers to the vicinity.