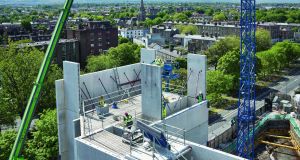 Some €200 million of the monies raised will be used specifically for “green” projects that meet a defined set of sustainability criteria under Iput’s “green finance framework”.

The most notable project in this regard is the company’s ongoing development of LinkedIn’s new European headquarter campus at Wilton Park in Dublin 2.

Due for completion in 2023, the 600,000sq ft mixed-use scheme will comprise 580,000sq ft of grade A office space, all of which will carry LEED Platinum, Wired Score Platinum, WELL Gold and BER A3 energy certifications.

Commenting on this, Iput chief executive Niall Gaffney said: “The long-term winners in real estate will be those who place sustainability and the occupier experience at the centre of their investment decisions – attributes we believe are now more important than ever before.

“Our € 200 million green facility will contribute to the funding of the development at our Wilton Park estate. This 600,000sq ft development, which has been fully pre-let to LinkedIn, will bring true placemaking to the city centre while providing the space for significant job creation, reinforcing Dublin’s position as a global digital hub.”

While the current Covid-19 crisis has seen a dramatic increase in the numbers of people working temporarily from home, and prompted questions in relation to the future prospects of the office, LinkedIn is committed to occupying all four blocks at Wilton Park on a 25-year lease with a term certain of 12 years.

Iput resumed work on the development of the US tech giant’s new headquarters earlier this week.

The company is also back on site at the Tropical Fruit Warehouse, an 80,000sq ft office building it is developing in Dublin’s south docklands.

Quite apart from renewing and increasing its existing credit facility with Wells Fargo from €250 million to €300 million, Iput also raised an additional €200 million from 11 institutional investors in the US private placement market in the first quarter of this year.

Taken together the transactions with Wells Fargo and institutional investors in the US saw the weighted average maturity of Iput’s debt increase from three years to 7.5 years, with an extremely low loan-to-value ratio of just 7 per cent.

The €200 million “green” component within Iput’s credit facility with Wells Fargo is a record for the Irish real estate market.

The funds will be used for projects under Iput’s green finance framework. That framework is based on the “green loan principles’ developed by the European Loan Market Association.

The relevant criteria include a minimum LEED Gold equivalent rating for environmental efficiency, a defined improvement in a building’s BER rating and a range of other renewable and energy efficiency metrics.