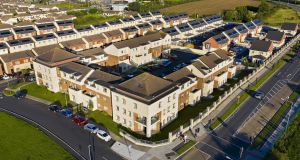 Hampton Gardens 1.5km west of Balbriggan town centre and 1.5km from the M1

Joint agents Cushman & Wakefield and Sherry FitzGerald Cumisky are guiding a price of €10.5 million for a multi-unit residential investment opportunity at the Hampton Gardens scheme in Balbriggan, Co Dublin.

The portfolio comprises 40 ground-floor apartments with two-storey duplexes overhead. There are 14 two-bedroom units, 25 three-bedroom units and one four-bedroom unit.

While 36 of the units are occupied, the remaining four have only recently been offered to the market for their first letting, meaning they are not subject to the rental cap. Such is the demand for lettings that the current owners are happy to underwrite the asking rents for 12 months or until such time as the vacant properties are let.

The 36 units already occupied are let on standard residential tenancies most of which have migrated to Part IV leases. These rents average € 1,250 per month for the two-bedroom units, € 1,300 for the three-bedroom units while the four- bedroom unit is rented for € 1,356 per month. The four most recent lettings have yielded rents of €1,650 for two-bed units. The remaining four duplex units are on the market for €1,850-€1,950 per month.

The investment also includes an additional €10,000 per annum generated from a telecom licence agreement.

Once fully occupied, the overall investment will produce a total gross income of about €626,000 per annum. However, the estimated rental value is closer to €880,000 per annum, based upon recent lettings in the scheme, according to the joint selling agents. The guide price of €10.5 million reflects a gross initial yeild of 5.96 per cent, and an attractive reversionary yield of 8.4 per cent assuming standard purchaser’s costs.

The wider Hampton Gardens development, completed in recent years, comprises 79 mainly three-bedroom houses and the 40 apartments that are the subject of this sale. It is off the Naul Road in Balbriggan, on the town’s main arterial route to the M1 motorway, next to Millfield Shopping Centre, 1.5 km east of the M1 motorway and 1.5 km west of Balbriggan town centre. Hampton Gardens is a strong letting location thanks to its proximity to local amenities and the numerous bus and rail commuter routes serving Dublin Airport and Dublin city centre.