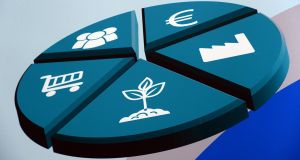 While debate lingers about persistent crises in housing and healthcare, the downward trajectory in unemployment statistics is a boon to Government claims of prudent economic stewardship.

On Tuesday, the Central Statistics Office (CSO) will release figures for June. The previous month’s rate had declined to 5.8 per cent, a drop of 0.1 per cent on April and of 6.6 per cent on May, 2017.

At the same time, the number of claimants on the Live Register also fell in May. The CSO reported the number of people signing on to have dropped by 4,100 (1.8 per cent) during the month, bringing the seasonally adjusted total to 224,900, its lowest level since July 2008. June’s rates are published on Thursday.

Also last month, the CSO’s Labour Force Survey showed total employment in the Irish economy rose to 2.237 million in the first quarter of the year, just above the boom-time high recorded in the final quarter of 2007.

However, for perspective, the CSO noted a bigger population and a larger workforce than 2007 and said the employment rate – the proportion of adults with jobs – remained below the pre-crash level.

Commenting on those figures, Ulster Bank said they were nevertheless an indicator of the economy passing “another important milestone in its recovery journey”.

“While jobs growth remains broadly based both across sectors and regions . . . there are some signs of Dublin dominance as workers from the capital accounted for 57 per cent of the jobs growth seen over the past year,” it said.

C&C Group’s AGM this week will mark the beginning of a new era but comes in the aftermath of a decline in sales at the drinks company.

In May, the Bulmers cider maker announced the retirement of chairman Brian Stewart after eight years and his departure will become official following Thursday’s shareholder meeting in Dublin.

His successor Stewart Gilliland was previously chairman of Booker Group from 2015 until its acquisition by Tescoin March, and is senior independent director of Mitchells & Butlers. He joined the C&C board as a non-executive director in 2012.

Mr Gilliland takes the top seat at a challenging time for the drinks producer. In May, it announced that revenue and profit had fallen in the year to the end of February, blaming severe weather in H2.

Branded sales in Ireland and the UK increased modestly over the period but revenue fell more than 4 per cent to €312.1 million, while profit was down almost 7 per cent to €40.1 million.

The company also noted the one-off impact from revisions to the AB InBev distribution agreements, which had resulted in the loss of a number of wholesaler accounts in Ireland. These had contributed almost €15 million in revenue and €5 million in profit in the previous period.

However, after the results were published, the company said it had received approaches from several major drinks manufacturers asking if it would enter contracts to manufacture their products at its plant in Clonmel.