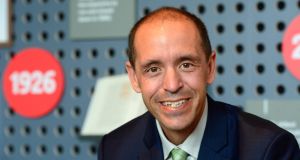 Chris Lehane: “Ultimately a basic question is begin called about do we want to live in an open world or a closed world.” Photograph: Cyril Byrne

It’s not every day you sit across a table from someone who was dubbed the “master of disaster”. But Chris Lehane, Airbnb’s head of policy, is certainly skilled at damage control.

During his time in the Clinton White House, he dealt with two of the biggest scandals to hit the presidency – the Monica Lewinsky affair and Whitewater. That led to the moniker being bestowed on both him and Mark Fabiani, who was special counsel to Bill Clinton, by the US publication Newsweek.

Airbnb may not have disasters that need managing on quite the same scale, but Lehane’s skills extend much further than damage control. Before joining Airbnb he provided strategic counsel to clients ranging from political and corporate to technology, entertainment and professional sports. His first involvement with politics began at 12, when he was involved in Teddy Kennedy’s 1980 presidential campaign. During his time in the White House, he served as press secretary to then vice-president Al Gore, special assistant counsel to Bill Clinton and counsellor to housing and urban development secretary Andrew Cuomo.

So, when it comes to navigating the tightrope between the tech industry and politics, he has all the necessary skills.

He also has an impressive breadth of knowledge about Irish history and traditions. It’s part of his job at Airbnb, given that he has to deal with the intricacies of doing business in 191 countries. But there is also a personal element to his relationship with Ireland: as the name suggests, he is Irish American. His grandfather came from Tralee, Co Kerry, emigrating to the United States alone when he was 13 or 14 years old.

“They grew them a little tougher,” he says. “He came to Boston, eventually joined the US navy and was highly decorated in the second World War. He never really came back.”

Lehane, however, has been back a number of times. During his time with the Clinton White House, Air Force One, the president’s plane, would often stop at Shannon to refuel, and Lehane would find himself in the airport’s pub, which would be opened up for the passengers regardless of the time. “It became my thing. I’d stop, they’d open up the pub, and I’d sleep the rest of the trip home.”

But what he considers his first proper visit to Ireland came in 1997, when he travelled here for a friend’s wedding to a woman he had met when she was working in the US for the summer.

“We walked into Burger King to get a burger and he met her. His family was from Kenmare. He walked up to her, she started talking, and he said ‘I’m going to marry this girl’ on the spot,” he explains. “Flash-forward 10 years and he ends up going back and finding her.”

With the wedding taking place in Kerry, Lehane decided to combine the wedding trip with a family heritage expedition.

“I had a Clinton T-shirt on from the ’96 re-election. I just happened to be wearing it,” he says. “I realised pretty quickly I would never have to buy a single drink in any pub if I was wearing a Clinton T-shirt. So I wore that shirt every night.”

It was on the same trip that Lehane says he had his original Airbnb experience – years before the website was even set up. He visited a tourist information office to try to find accommodation, which was proving more difficult than expected.

“The hotels were all filled, the B&Bs were full. They gave me this address of a farm, and I rented a little cottage in this farm for a week for the wedding,” he says. “It was pre-Airbnb but it was the equivalent of an Airbnb. It was fantastic. I got woken every morning by cows outside. I always feel I had my original Airbnb experience here in Ireland before Airbnb even existed.”

It is that authentic travel experience that Airbnb has been aiming its platform at since it was set up in 2007 by Brian Chesky and Joe Gebbia in San Francisco. The company opened its Irish offices five years. Initially, Lehane says, the site aimed itself at millennials. Two years ago, they made up 80 per cent of the travellers using Airbnb; now that figure is about 60 per cent.

Part of the reason for that shift, he says, is a change in the way people view travel. Airbnb also opened its platform to boutique hotels and B&Bs, because they offer some of that authentic travel experience while still appealing to people who prefer not to live in someone else’s home.

But at the heart of it all is Airbnb’s mission to connect people, and to democratise travel. Airbnb hosts get 97 per cent of the income generated by their property; travellers get to stay in places that would never otherwise have been available to them. It seems like a mutually beneficial proposition.

There have been hiccups along the way. The company has faced push back from the hospitality industry and regulators in some of its global markets, and has been blamed for, at least in part, exacerbating the rental crisis in Ireland because it is more lucrative to and attractive, in some cases at least, to opt for short term rentals over long term tenants. More recently, the EU told Airbnb to bring its terms and the way it presents its prices into line with the region’s unfair commercial practices and contract terms rules.

This is probably one area where Lehane’s skills come most into play. But the company is seeking a solution to the problem, he says. He compares it to the introduction of cars when the horse and cart was a more common method of transport. The existing rules for horses and buggies didn’t cut it for cars, so a new approach was needed. And Airbnb welcomes it.

“Read my lips: we want to be regulated,” he says, borrowing a phrase from the other side of the political aisle in the US. “We may be the first private sector company in the history of 100 years of the Irish Republic to come and say that.”

There have been conversations on the issue, Lehane says. The company has done the maths, and based on what has worked in other regions – a 60 day limit on rentals per calendar year in Amsterdam, a one host, one property rule in New York, data sharing on hosts and their activities – it makes sense for Ireland to bring in regulations that limit short term rentals to 180 days in a calendar year.

Typical hosts in Ireland make about €3,500 per year, with 22,000 properties signed up for part or full rental. Lehane says the majority – around 70 per cent – are properties that would otherwise not be available for long-term rental.

“There is a recognition that this is driving real economics to real people. We generate over €500 million in economic activity,” he says. “We probably drive as much tourism in the rural parts of Ireland as any other entity out there, so really diversifying and democratising the benefits of travel and tourism in Ireland.”

It was this sharing of benefits with real people that appealled to Lehane before he joined Airbnb. He points to economic inequality and wage stagnation as some of the reasons behind the uncertainty gripping the world, including in the US and the UK, with Brexit looming on the horizon. He sees much of it as a reaction to the fact that the establishment has not necessarily delivered for middle class and working class families for a generation.

“Ultimately a basic question is being called about do we want to live in an open world or a closed world. A closed world is one where people are talking about building walls and talking about travel bans and implementing travel bans. It is one where people are living in digital bubbles. At a time when we have incredible challenges to address – climate change, economic inequality, automations – a third of all jobs automated in 20 or 30 years – conflict on the rise, a closed world is going to be incapable of answering that,” he says. “So when people ask me what keeps me up at night, as a father of two boys who are 11 and 13, it is that this question is being called about whether we are going to have an open world or a closed world.”

However, he isn’t all doom and gloom about the future. Far from it. The same millennials that helped propel Airbnb to its current position are also who Lehane sees as helping haul the world out of its current predicament.

“I am a member of the optimist club. I see the millennial generation being committed to an open world. My concern is, are we able to make it to that generation? I think we will. I think they will be incredible, but we have to get there.”