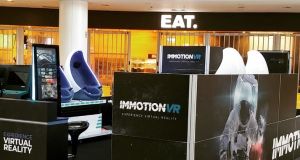 The company, which is focused on developing immersive virtual reality (VR), was the first direct investment made by Sure Ventures, an investment company founded by Mr Downes in 2017.

Sure, which itself listed in London earlier this year, invested £500,000 (€566,000) in Immotion, a start-up that creates (VR) arcade-style game pods that are displayed in shopping malls, leisure centres and other locations.

“As we know, the VR and AR space is booming, and the market is forecast to grow significantly over the next few years. Immotion Group are pioneers in the industry and, with their unique immersive experience, they’re set to fully transform family, out of home entertainment. The team behind Immotion are a group of true innovators and we don’t see anything slowing them down,” said Mr Downes.

The entrepreneur sold Feedhenry, the Waterford-headquartered mobile software developer that he founded in 2009, to US multinational company Redhat for more than €60 million, in 2014.

Sure Ventures raised £3.3 million (€3.7 million) when it listed on London’s specialist funds market in January with proceeds from the flotation invested in the Enterprise Ireland-backed Suir Valley Ventures, which Mr Downes founded two years ago.

Suir specialises in backing start-ups focused on virtual and augmented reality and the internet of things (IoT). It has backed a number of Irish companies including War Ducks, Wia, ProVision and Dublin-listed Immersive VR Education.