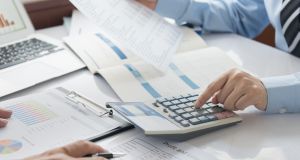 On Tuesday, the PwC-Irish Times Tax Summit will wrestle the most topical questions in an increasingly uncertain world. File photograph: Getty

On Tuesday, the PwC-Irish Times Tax Summit will wrestle the most topical questions in an increasingly uncertain world. In the run-up to Budget 2020 and against the continuing backdrop of Brexit and other global uncertainties, the summit will gather business leaders to focus on changing international tax and business environments and their potential impact on Ireland.

It will dissect trade tariffs, the potentially slowing global economy and future international corporate tax proposals which could bring fundamental change to global and European markets.

Speakers at the event will include: Minister for Finance Paschal Donohoe; Pascal Saint-Amans, director at the Centre for Tax Policy and Administration at the Organisation for Economic Co-operation and Development (OECD); PwC’s US deputy tax leader Pam Olson; Irish Times contributor Chris Johns; and PwC head of tax Susan Kilty.

Global tax issues of the day will be framed in the Irish, European and American contexts and there will be opportunities for questions from the floor.

It has been an eventful build up to Ryanair’s agm this year but then there is rarely a year in which that cannot be said.

By any standards though, 2019 has seen the kind of developments that have always seemed so far away from the budget carrier – a new chief executive, the ongoing threat of industrial action and even a dreaded profit warning.

There was a time when the only question for Michael O’Leary was when he might consider retiring and, while that hasn’t happened yet, the airline has appointed its former chief people officer Eddie Wilson as replacement chief executive from this month (O’Leary will remain in control of the overall group of airlines).

Perhaps O’Leary is tiring of the grind. Wilson’s inbox will be full of paperwork on Brexit and preparations to cut up to 900 pilots and cabin crew as a result of delays in the delivery of Boeing’s 737 Max.

Then there is the trade union saga, a relatively unfamiliar theme in the Ryanair narrative. In late August it secured a High Court injunction preventing its Irish-based pilots from going on strike. It also pursued similar action in the UK’s high court to block threatened strikes there.

In July, the parent company Ryanair Holdings reported a dip in profits of 21 per cent to €243 million in the three months to the end of June.