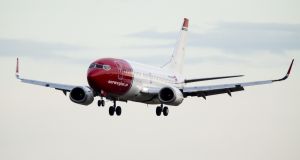 Last month Norwegian Air stock took an upward jolt amidst speculation it may be acquired by Lufthansa. Photograph: Getty Images

Why not examine public spending policies before introducing them? This and other questions will be addressed at the Economic and Social Research Institute’s (ESRI) annual Budget Perspectives conference.

Every year the ESRI launches new research on policy issues related to the upcoming budget, and this year will focus on three reports.

As well as income growth and distribution, and the impact of changes to the one-parent family payment, the conference will examine the idea of testing public policy before it is put in place.

The paper, “Using Experiments to Pre-Test Public Policy” by Pete Lunn and Deirdre Robertson, examines the increased use of experimental pre-tests, both internationally and in Ireland. It concludes that such tests can result in savings for the public finances and for business.

It also identifies a “rapid rise” in the number of governments and agencies taking this approach.

“Increasingly, these experiments take the form of pre-tests of alternative interventions, allowing policymakers to select the option shown to work best – and to avoid potentially expensive mistakes,” the ESRI explained ahead of the event.

Among a list of international examples are the pre-testing of consumer labels designed to provide environmental information on products, regulations to protect online gamblers, and interventions to help households save energy following the installation of smart meters. Some pre-tests have been done in laboratories, some via online experiments, and others through large-scale field trials.

The proceedings will be opened by Minister for Finance Paschal Donohoe.

Norwegian Air reports second-quarter results on Thursday at a time when the airline’s fortunes appear to be on an upward trajectory.

The Scandinavian carrier captured the hearts and minds of Irish consumers when it arrived here with its low-cost US flights. Last month its stock took an upward jolt amidst speculation it may be acquired by Lufthansa, whose chief executive Carsten Spohr spoke about “another wave” of European consolidations.

While there are no certainties, Norwegian said it had received several expressions of “indicative and preliminary interest in share acquisitions, mergers...and various forms of operational and financial co-operation”.

Previously, IAG had bought 4.6 per cent of the airline in April, although two approaches to buy it outright were rejected by Norwegian’s board.

However, some have questioned the sustainability of Norwegian’s business model. In the first quarter it showed a negative free cash flow of 3.8 billion Norwegian krone (€402m) while operating revenue rose by a third from the same period a year earlier to 6.99 billion krone. The group’s net loss shrank from 1.49 billion krone in the quarter last year to 46 million krone.

It has been increasing its long-haul business in an effort to arrest losses. Passenger traffic grew by 51 per cent in May.

Indicators: US exports and imports (June).