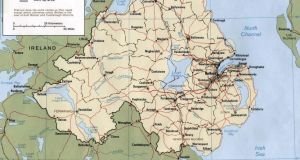 Nearing a century in existence the Irish Border has become the defining feature of Ireland’s political geography. The Border was established in law in December 1920 but as an exclusion zone between two parts of the United Kingdom chalked for devolution, not independence.

When the Anglo-Irish Treaty was ratified in 1922, the boundary line became an international border. But who drew the line in the first place and what thinking lay behind the decision to go for full six-county exclusion?

In the spring of 1914, the British government secured secret approval for a strictly time-limited exclusion of an undetermined portion of Ulster from the leaders of nationalist Ireland – John Redmond, John Dillon, T P O’Connor, and Joseph Devlin.

Once the leadership of the Irish Parliamentary Party had been locked in, the British government began in earnest to draw up possible schemes for the exclusion of Ulster.

The Chief Secretary for Ireland, Augustine Birrell, called upon three senior Irish civil servants to draw up a boundary for an Ulster exclusion zone. These were Birrell’s undersecretary, Sir James B Dougherty; W F Bailey of the Estates Commissioners Office; and Sir Henry Augustus Robinson, vice-president of the Local Government Board for Ireland. Birrell set May 6th as the deadline for receipt of proposals from his three advisers.

When submitted, each scheme included a justification for why certain communities were left north or south of the dividing line.

Ultimately it was Dougherty whose boundary scheme was adopted. On the eve of the first World War, Redmond and Edward Carson faced each other down for their claim to Fermanagh and Tyrone but following the 1916 Rising, Redmond abandoned his claim to what would become Northern Ireland’s two Catholic-majority counties.

Historian Roy Foster has described Redmond as “desperate . . . to achieve any settlement going” after the Rising.

Returning to 1914, the texts for the three exclusion schemes give unparalleled insight into the conceptual underpinnings of the modern Irish Border. Two stark points emerge.

Firstly, decisions unsympathetic to large borderland communities were taken in the name of administrative efficiency.

Secondly, the Border’s architects explicitly bowed to force and the threat of violence. Decisions were made to leave substantial communities on the “wrong” side of the exclusion line because of the perceived strength of minority paramilitaries and agitators in their midst.

Taking Bailey first, his was the most disruptive scheme and it paid the least heed to existing administrative boundaries.

Instead, Bailey relied on physical geography to craft a more visible border. In Fermanagh, Bailey cut straight through both of the county’s parliamentary divisions, running his boundary line directly up the middle of the Erne waterways system.

Of the three schemes, Bailey’s was the only one in which his accompanying notes made no acknowledgement to the scheme’s temporary nature. Bailey’s use of physical geography to create a visible and less permeable boundary line further suggests he had a permanent settlement in mind.

Further down his boundary line, Bailey proposed the inclusion of the entire parliamentary division of North Monaghan within the unionist area.

Monaghan was a county nobody else was even considering and North Monaghan had a two-thirds Catholic majority.

Because his boundary line sliced through existing administrative units, it was impossible for Bailey to accurately estimate how many of the almost 1.2 million people he planned to exclude from the jurisdiction of the Home Rule parliament were Catholics and Protestants.

By far the most thorough of the three exclusion schemes was that devised by Robinson. In drawing his boundary line, Robinson took local government boundaries as his operational unit: a method his undersecretary would later dismiss as unworkable.

The Robinson scheme proposed the exclusion of 26.85 per cent of the population of Ireland and 28.58 per cent of Ireland’s land by valuation. Robinson’s exclusion zone was two-thirds Protestant and one-third Catholic. Of the three, Robinson’s boundary line was the only one which explicitly considered infrastructure such as road and rail connections.

Even though Robinson’s line was not ultimately adopted, his justifications are highly instructive in explaining the thinking underpinning the final shape of the Irish Border, especially the inclusion of the two Catholic majority counties, Tyrone and Fermanagh, and the majority Catholic city of Derry.

On the eastern end of the boundary line, the Robinson scheme showed considerably more sympathy to Catholics than simple six-county exclusion. Robinson left south Armagh and south Down, including the heavily Catholic town of Newry, within Home Rule jurisdiction.

One can only imagine how differently subsequent Irish history might have played out had south Armagh been under Dublin rule from the outset. In the western half of Ulster, Robinson made a number of sweeping decisions regarding large swathes of territory with solid Catholic majorities.

In drawing his line, Robinson factored in “the degrees of obstreperousness in the rival sectarian factions on the border line”.

All three schemes recommended that Ulster’s second city, Derry, which had a 56 per cent Catholic majority, be put into the exclusion zone

In terms of appeasing volatile sectarian communities, Robinson bent to both nationalist and unionist extremists. Of Crossmaglen nationalists, he opined that they “are about the warmest lot I know”.

In Fermanagh, Robinson’s justification was even more illuminating. Here he justified the inclusion of an area with a 3,000-strong Catholic majority because “there has been more money spent on armament and drilling here than in any part of the county and these Enniskillen and Lisnaskea protestant farmers are the most blood-thirsty set of ruffians I know”.

Fearing a contagion effect in Cavan and Monaghan, Robinson defended the exclusion of these districts as “there would be no peace or settlement along the whole border line if these people were left out”.

Bailey had applied the same logic to justify the inclusion of North Monaghan and the whole of Tyrone, the Protestant minorities of which he described as being “very strong and . . . better drilled and armed than in almost any part of the Province”.

Despite all of his careful work and calculations, Robinson all but threw away all his careful cartography at the end of his letter to Birrell stating: “I expect you will find that the Ulstermen’s minimum will be six entire counties in and no option . . . Personally, I agree about no option [putting the matter to a plebiscite]. It will indeed mean riots when this crucial issue is announced.”

The third and final scheme to be submitted was that of Dougherty, the highest-ranking civil servant in Ireland.

Dougherty first wrote on May 7th explaining that it would be “a difficult, if not impossible job to construct these pens” and that “the policy of exclusion, whatever plan may be adopted, bristles with difficulties and . . . I do not see how they are to be surmounted.”

Dougherty’s full memorandum was submitted on May 11th. It considered the merits and demerits of dividing the province by local government areas, parliamentary divisions, and full counties. Of these, Dougherty’s preference was for the scheme which was ultimately adopted: county option.

Dougherty’s rationale focused largely on the administrative headache he foresaw in dealing with an otherwise excluded area in which local government boards, county councils, and existing parliamentary constituencies would be split across two jurisdictions.

All three schemes recommended that Ulster’s second city, Derry, which had a 56 per cent Catholic majority, be put into the exclusion zone. Robinson argued that it was “impossible to keep the maiden city out of the parent county”.

Dougherty reminded his chief secretary that “the city of Derry has strong sentimental attractions for the Ulster Protestant, and it is the headquarters of the county administration” adding that “it is unlikely the ‘Covenanters’ will now consent to see the city excluded from Protestant Ulster.”

Despite declaring for the whole-county option, Dougherty fudged his answer to the question of whether four or six counties should be excluded.

His rationale for four-county exclusion was based on the fact that such a scheme would create “a tolerably compact area” but he seems on balance to have conceded that six counties would be the more realistic outcome due to the fact that “it is difficult to see how the Ulster Covenanters in the four included counties can abandon their brethren in Tyrone or Fermanagh”.

No more than Robinson, Dougherty was conceding to the power of force and threat in making his decisions over Ulster. Historian Brendan O’Donoghue makes a convincing case that copies of various maps, including Robinson’s May 6th map, were circulated among attendees at the Buckingham Palace Conference in July when it came to discussing permutations for an area for exclusion that might be acceptable to both nationalists and unionists.

The stark reality of the Irish Border is that it was never intended to be an international boundary. What began as an idea for a temporary demarcation line between two devolved United Kingdom parliaments evolved into something much more significant.

It has seen customs posts, cratering, spiking, checkpoints, and militarisation over its lifetime. The Irish Border has never been “softer” than it is at the present moment. Equally, there has never been such uncertainty over what the future holds in its chequered history.