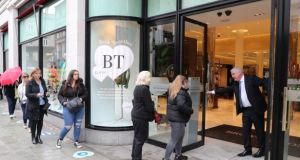 Ireland’s most upmarket retailers have been unable to escape the crippling impact of Covid-19, with news that Brown Thomas and Arnotts will shed almost 15 per cent of their staff. The announcement, just over two months after the Weston-family controlled stores reopened their doors, raises further concerns about prospects for the sector as shoppers remain reluctant to come into urban centres, writes Charlie Taylor

Ireland’s sandwich king, Greencore, is also suffering at the hands of coronavirus, with close to 300 staff at its largest UK plant, in Northampton,recently diagnosed with the virus. The company has paid privately to have workers tested after an outbreak in the town.

Elsewhere, it’s a case of another day, another bank getting itself into trouble. This time Ulster Bank has managed to irritate some customers. Having told them they were good to extend payment holidays on mortgage loans due to Covid, the bank then told them they couldn’t...by text, writes Barry O’Halloran. In the end, all extensions have been honoured though the bank has had to make a payment to at least one irritated customer.

Ireland needs to build 47,000 properties a year to meet demand over the next five years, according to a report commissioned from Trinity economist Ronan Lyons by Irish Institutional Property – the lobby group of Ireland’s largest property investors – writes Eoin Burke-Kennedy. That’s double the Government’s figures. And it’s not starting well, if CSO data on home completions is to be believed. In the second quarter, the number of new homes completed fell 31.9 per cent, writes Laura Slattery.

Speaking of building, residents will have to book one-hour kitchen slots in a planned new shared co-living development opposite the British embassy in Ballsbridge, under an application by Richard Barrett’s Bartra, writes Gordon Deegan. Objectors, including Senator Ivana Bacik argues that the co-living model has met its match in Covid.

Bosses at Ireland’s largest publicly-quoted companies saw their pay jump by an average 18 per cent last year to €2.45 million, but that’s not likely to be matched in 2020. See who got what in Joe Brennan’s article.

And staying with comany bosses, investors are nervous that the announcement of a new chairman designate by Aryzta indicates it has given up on securing a buyer ahead of a contentious EGM next month. Outgoing chairman Gary McGann had said he would stand down if no buyer had been sourced by then. Worse still, the activist investors hunting down the board don’t approve of the choice. Eoin Burke-Kennedy has the details.

Better news for the beleaguered airline industry. Grounded by Covid, three Aer Lingus pilots put their minds to solving the irritable and costly issue of delays in getting aircraft turned around in tight time slots. Now they’have raised ¤500,000 to commercialise their new communications approach to airlines, writes Ciara O’Brien.

In his economic column, John FitzGerald challenges the notion that we would all be better off in crisis if our governments had control over the exchange rate of our currency against others. Looking at the example of Finland in the 19980s and Ireland in the financial crisis, he says the figures just don’t add up.

Mark Paul is also mulling economic issues. If we had followed the advice of every epidemiologist and virologist who surfaced over recent months, he says in his Caveat column, we would probably still be living in rigorous lockdown. We need to look beyond Covid-19 every once in a while, and seek out ways to get things done, instead of cowering behind ways to do nothing, he argues.

Finally, no kissing on first dates. Those will be the rules for contestants when Coco Content’s new series of the popular reality show First Dates returns to RTÉ’s screens, according to Coco’s CEO John Switzer. He tells Gordon Deegan that he sees no reason why romance can’t blossom in an era of blowing kisses.

Stay up to date with all our business news: sign up to our news alerts and our Business Today daily email news digest.