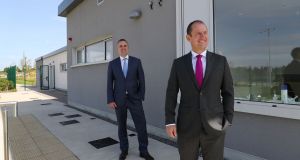 Quintain Ireland, the homebuilder owned by US private equity giant Lone Star, will seek planning permission for 1,000 new homes before year end on its land in Cherrywood in south Dublin, according to its joint managing partners.

The company, which owns the third-largest private residential landbank in the State, ultimately aims to deliver 3,000 houses, duplexes and apartments over seven years on the 118 acres of development and parks land in the middle of the Cherrywood strategic development zone (SDZ) that Lone Star bought for more than €120 million last year.

Quintain Ireland, led by Eddie Byrne and Michael Hynes, filed last month for approval to build an initial 134 three- and four-bed houses and duplexes, which it plans to commence construction on this year, and will be available for sale in early 2021.

“A full masterplan for this area will be published before the end of September and outline our ambitious vision to deliver a new place to live in south Dublin, that is well-connected to existing infrastructure and amenities,” said Mr Byrne.

“Cycleways and pedestrian routes will link to the Luas and Dublin Bus stops, and a vibrant village centre will provide shops, restaurants and cafes, and creche facilities.”

Lone Star last year abandoned a plan to roll its massive Irish residential landbank into a Dublin-listed vehicle, opting instead to set up an Irish unit of its UK property development company, Quintain, to deliver more than 9,000 homes on the sites.

The 460-acre landbank across Adamstown and Clonburris in west Dublin, Portmarnock in North Co Dublin, and Cherrywood, at the interchange of the M50 motorway and N11, will also include 600,000 sq ft of commercial space when fully developed.

Quintain Ireland was launched in October 2019 and has grown its Dublin-based team to over 25 people, including the recent appointment of former head of Sisk Living Norman Higgins as its head of construction.

The company is looking at including office space in the design of new homes as the Covid-19 pandemic is likely to lead to people spending more time working from home in the future, even after the virus passes, according to the joint managing directors. Adding shared workspace to future apartment developments is also under consideration, they said.

The 1,000 homes that Quintain Ireland is seeking planning for by the year-end are part of the company’s so-called Cherrywood Village development, which, when complete, will comprise over 1,300 homes, two public parks and over 50,000 sq ft of retail and civic amenities.

Lone Star bought its Cherrywood land from fellow US investment firms Hines and King Street Capital. They had acquired the wider 412 acres of SDZ land in 2014 from Nama and a group of banks for €270 million. The land originally belonged to builder Liam Carroll, before his empire collapsed in the wake of the property crash.

Quintain in the UK owns one of London’s largest urban regeneration sites on 85-acres surrounding Wembley Stadium, in which the equivalent of €2.2 billion has been invested to date.