Homebuilders cite lessons from ‘scary’ crash as they plot future

Quintain directors on Covid-19, a scrapped IPO and plans for Dublin’s Cherrywood 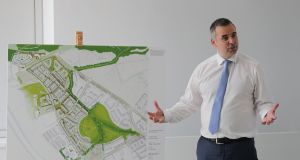 Eddie Byrne and Michael Hynes may not quite finish each other’s sentences. But they’re not far off. The joint managing partners of residential developer Quintain Ireland need to have a tight rapport as they plan construction across the State’s third-largest private residential landbank – while navigating Covid-19 and an increasingly noisy political backdrop on housing.

Quintain was set up late last year by US private equity giant Lone Star to deliver more than 9,000 homes on Irish land it accumulated following the property crash.

Byrne and Hynes read from the same architectural sheet, as you might expect, when addressing the impact of the coronavirus pandemic on house prices.

“We think the market is going to be remarkably resilient,” says Byrne (54). He sees the fact that less than 10 per cent of Irish mortgageholders sought payment breaks during the coronavirus crisis as supportive for affordability and demand at a time when the already low supply of new housing is on track to fall 15-20 per cent this year as a result of the industry being in lockdown for seven weeks.

“We don’t see house-price inflation happening for the next short while but, in terms of prices holding, we’re starting to get more confident on that,” Hynes (41) chips in during a joint, if socially distant, interview in a sports pavilion on the fringes of 118 acres of development and parkland that Lone Star bought in Cherrywood in south Co Dublin last year.

While some banks predicted in May that Irish house prices may plunge 12 per cent this year, economists at Davy, who were among the more optimistic, now see their forecast for a 5 per cent decline as too bleak. Figures from the Property Price Register and MyHome.ie, which is owned by The Irish Times Ltd, suggest a sharper pick-up in activity than expected in recent weeks.

“We see evidence in our own live sites. We’ve closed on 40-50 houses since reopening and there have been no discussions with buyers about price cuts or delays,” says Hynes.

The two, who were key to Lone Star’s investments in Irish commercial property loans and assets between 2013 and 2019 as executives with its Hudson Advisors Ireland asset management unit, don’t need to exchange side glances when deciding who will take the question as to why the company last year scrapped plans for a flotation of its 460 acres of Dublin land on the stock market in favour of setting up Quintain Ireland.

“The IPO [initial public offering] didn’t happen because markets were turning upside down, and Brexit,” offers Byrne. “We had a relook at the whole housing market. Our view, which we’d hold very strongly, is that actually the market in Ireland really has some way to go. We don’t have a housing crisis in this country, we have an accommodation crisis, be that social housing, affordable housing, housing for sale, apartments. We need all of them.”

The IPO was intended to combine the Lone Star land with Durkan Residential, a housebuilder led by Patrick Durkan, in a new company called DRes Properties. The IPO may have been taken off the table but the ties remain close. Durkan Residential is the building contractor for Quintain Ireland on its sites in the coastal suburb of Portmarnock in north Co Dublin, and in Adamstown, west Dublin.

The decision not to IPO has spared the executives at Quintain Ireland, a unit of Lone Star’s Quintain property development company in the UK, the anguish of having to defend the company to stock market investors when it’s not a great time to be a listed Irish housebuilder.

Cairn Homes and Glenveigh Properties, which US private equity firm Oaktree used as a vehicle to float and partially exit its Irish landbank in 2017, are down 30-40 per cent since DRes was initially supposed to float in late 2018.

The reasons for investor apathy are many. Covid-19 has served to compound the effects of rising building costs, affordability constraints due to Central Bank mortgage rules, and uncertainty over Brexit. The new Programme for Government – big on aspiration but vague on detail on housing – hasn’t helped.

Still, Lone Star’s confidence in the market was evident in its purchase of the Cherrywood plot last July for more than €120 million – even as it was becoming clear that an IPO was off the cards.

Lone Star had been following Cherrywood since, in 2014, investment firms Hines and King Street Capital acquired the wider 412 acres at the interchange of the M50 motorway and N11 that had been accumulated by builder Liam Carroll before his empire collapsed.

While Hines and Dutch pensions group APG Asset Management are currently developing a €1 billion mixed-use town centre at the heart of the Cherrywood hub, the sale of development land to Lone Star was part of a strategy to recycle cash on the massive project.

Quintain filed last month for planning permission to build an initial 134 three- and four-bedroom houses and duplexes on its Cherrywood land. It aims to seek approval by the end of the year for a total of 1,000 homes there.

All told, it plans to build more than 3,000 houses and apartments on the site over seven years.

“This really is unique in terms of location,” says Byrne, rattling off how the site will have four Luas stops, is located beside the M50, close to the sea and at the foothills of the Dublin mountains.

“The average price of a home in Dún Laoghaire Rathdown is about €600,000. Almost 65 per cent of everything we plan to build here will be below the average price for the region.”

The executives carry scar tissue, and lessons to match, as alumni of the boom-time property sector. Byrne was head of lending at Anglo Irish Bank’s North American business between 2005 and 2011.

“Anglo, honestly, was a scary place to be when it all started to go wrong,” he says. “However, the property finance market in the US, having gone through the savings and loans crisis [between 1986 and 1995] was entirely different to the way it was in Ireland [before the crash]. In the States, every deal had real equity in it and a proper business plan. I learned a huge amount there.”

Anglo’s $9.6 billion (€8.1 billion) US commercial loan book would end up being sold to banking giants Wells Fargo, JP Morgan – and Lone Star – for a reported 80 cents on the dollar in 2011. By contrast, Anglo was forced to accept a 62 per cent discount on Irish and British loans transferred to Nama during the crisis.

Hynes worked in Bernard McNamara’s Grattan Property between 2004 and 2011 before the business was wound up as Nama dealt with the developer’s loans. Hynes would also, like many in the industry, work for a stint for Nama itself.

“The key lessons I learned was the need in this business to go further on due diligence,” he says. “It’s thinking more about the long-term and in detail on all factors that could impact the delivery of a site – whether it’s archaeological or environment issues, planning, the amount of units that can be built in a year, or the target buyers.”

Quintain Ireland expects to sell about 300 homes in its first full year in operation – split across active sites in Portmarnock and Adamstown – before ultimately ramping up to about 1,500 units a year, according to Hynes.

“If there was any time for something like Covid-19 to hit, this was probably a better time for us,” said Byrne. “This is a year of getting planning permissions in place. It wasn’t necessarily a big building year for us.”

1 Air travel never going ‘back to way it was’
2 BoI redundancies, ‘tax war’ warning for Ireland, and retailers in rent arrears
3 Should I switch bank now with Ulster Bank at risk of closing?
4 Will brother’s widow get half of our parents’ estate when they die?
5 Bank of Ireland sees more than 1,400 staff apply for redundancy
6 South Dublin land at €19m has scope for up to 500 homes
7 Coronavirus vaccine: 15 billion doses needed to inoculate the planet
8 Tánaiste urges businesses to brace for Brexit with 100 days to go
9 O’Flynn Group in bid to build 1,137 homes on Dublin’s Naas Road
10 Majority of submissions favour changing law on forestry licence appeals
Real news has value SUBSCRIBE