How Argentina and its creditors thrashed out a $65bn deal

Country has had 9 sovereign defaults since independence in 1816 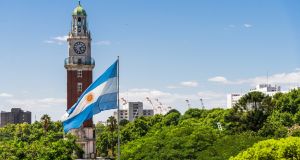 One bondholder described the deal, which implies a recovery value of about 55 cents on the dollar, as a “creative compromise”. Photograph: iStock

By the time members of Argentina’s biggest bondholder group hopped on to their weekly conference call at 9am on Monday, August 3rd, the anxieties of the past several months had begun to fade.

Less than 12 hours earlier, Martín Guzmán, the economy minister, and Jennifer O’Neil, a managing director at BlackRock, had reached an agreement in principle to restructure $65 billion (€55 billion) of foreign debt, allowing the country to move on from its ninth sovereign default since independence in 1816.

Both sides gave a little ground, bringing an end to talks that had stretched on since leftist president Alberto Fernández took power in December.

What made the breakthrough all the more striking was that Argentina and its biggest bondholders were locked in what appeared to be an intractable stalemate just a week earlier. The official press statement came in the early hours of August 4th – just before the government’s latest deadline for striking a deal was set to expire.

“We worked almost nonstop from Sunday night until 3am on Tuesday, only pausing to sleep for a couple of hours on Monday morning,” said Sebastian Loketek of Bank of America, one of the government’s advisers. “There were moments of great tension.”

On July 27th, the country’s largest bondholder groups announced in a letter to Mr Guzmán that they had corralled more support for a new proposal that sought a recovery value of 56.5 cents on the dollar. The group claimed to represent more than 50 per cent of Argentina’s outstanding foreign debt and their message was simple: a deal could not get done without them.

The letter came after a series of official comments that the government – advised by Lazard – could not offer more than 53.5 cents. In an interview with the Financial Times on July 19th, Mr Fernández said “anything more would put our ability to [pay our debts] at risk, and I don’t want to swindle anybody”.

“That was the government’s position until the very end,” said one person close to the negotiations on Argentina’s side. “It looked like there was no way out of the situation. But then on [the night of July 31st] Alberto made a very smart move, [threatening] not to extend the deadline. That was the catalyst that changed the situation.”

The prospect of the government pausing talks with bondholders and instead shifting focus to hashing out a deal with its largest creditor, the IMF – which has already lent Argentina $44 billion as part of a record $57 billion bailout extended in 2018 – unleashed “absolute panic” among investors, said a person familiar with the matter.

“The alternative of not reaching a deal was not good for anyone,” added a creditor in the biggest group, which included BlackRock, Fidelity, Ashmore and T Rowe Price. Bondholders may have resorted to litigation, the person said, while the government would have struggled to revive an economy in danger of tipping into hyperinflation with about half of the population living below the poverty line.

According to Mohamed El-Erian, a senior adviser at Gramercy Funds Management, one of the smaller bondholders, the question for creditors became: “Are you willing to risk the high probability of a 20-30 per cent drop [in the value of the bonds] for 3 cents more [in the recovery value]?”

People close to the negotiations in Argentina highlight the role played by vice-president Cristina Fernández de Kirchner, who gave her blessing to Mr Guzmán to proceed with the deal when he visited her Buenos Aires apartment the day before the deadline. If she had not been so supportive, “we would not have a deal”, said one Argentine bondholder.

Another person said the tub-thumping populist, who led the country to its last default in 2014, acted as a kind of “nuclear deterrent”, making the threat of walking away more credible.

‘A lot of animosity’

Others noted the influence of Sergio Massa, the Peronist leader of the lower house of Congress, who acted as a channel for investors to relay messages to the president. One local banker noted there was “a lot of animosity” between Mr Guzmán and the investor community, which found the minister’s personality difficult. It was “instrumental that Massa stepped in to untangle the situation”, the banker added.

One bondholder described the deal, which implies a recovery value of about 55 cents on the dollar, as a “creative compromise”. Argentina moved forward the timing of some of its payments to bondholders, helping to boost creditors’ recovery value without changing the aggregate amount it pays out.

Bondholders still need to formally vote on the agreement. Their deadline is August 24th.

“My tagline for this deal is ‘No victor, no vanquished’,” said Richard Deitz, founder of hedge fund VR Capital, and a member of a creditor group representing holders of previously restructured bonds.

1 Will your boss let you work long-term from home – or from abroad?
2 House asking prices rebound but will likely fall again - MyHome
3 Revolut shifts regulation of Irish customers to Lithuania
4 AA Ireland bought by Olivier Sarkozy-led fund for over €200m
5 Google tells workers to return to country where they are employed
6 Plans for €2bn Dart expansion lure Bombardier to Dublin
7 Subway bread too sweet for the Irish tax authorities
8 Construction sector 'unlikely to recover' before 2023
9 City firms move £1.2tn and 7,500 jobs out of London - EY
10 Let’sGetChecked chosen by American Airlines for pre-flight Covid testing
Real news has value SUBSCRIBE