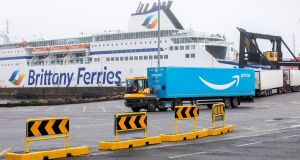 Brittany Ferries has unveiled three new weekly sailings between the Irish ports of Rosslare and Cork and Roscoff and Saint-Malo in northern France as traders seek more capacity on direct routes.

More direct ferry services between Ireland and mainland Europe are being launched to meet the increased demand from businesses looking to avoid Brexit checks with Britain.

Brittany Ferries has unveiled three new weekly sailings between the Irish ports of Rosslare and Cork, and Roscoff and Saint-Malo in northern France as traders seek more capacity on direct routes.

The sailings are being announced as post-Brexit trade rules introduced on January 1st deter Irish and continental European hauliers from using the British “landbridge” due to increased customs checks and paperwork. More than 150,000 lorries used this landbridge route every year.

The duration of the new direct services is about 18 hours. That is longer than the timing on the landbridge route but has no border checks as the freight remains within the European Union.

The company’s Cork-Roscoff service was expected to come on stream at the end of March but that has been brought forward due to the increased post-Brexit demand from businesses.

The new sailings will operate until the end of March when the scheduled freight and passenger services will resume between Cork and Roscoff, with two weekly sailings in each direction – a doubling of the frequency of the service for this year.

“It’s clear that Brexit has distorted flows of trade between France and Ireland. There’s now clear and compelling demand both in Brittany and beyond to boost freight capacity direct from the region to Ireland,” said Hugh Bruton, general manager of Brittany Ferries Ireland.

“And Irish traders too are seeking direct links to western France. We’re always listening to our haulier customers in order to best meet their needs and we look forward to restarting Brittany-Ireland services two months earlier than planned.”

The company’s new sailings come in addition to the extra weekly Rosslare-Cherbourg round-trip service that was introduced in mid-January. The company also already operates two weekly round-trip sailings between Rosslare and Bilbao in northern Spain.

The new routes bring the company’s weekly sailings to eight in each direction between Ireland and France, and a total of 12 sailings a week linking Ireland with France and Spain.

The new services bring to 32 the number of direct sailings to and from Rosslare and mainland Europe as the south-eastern port benefits from record freight levels as companies seek to guarantee supply lines and avoid post-Brexit border controls and checks at borders with Britain.

Glenn Carr, general manager of the Iarnród Eireann-owned Rosslare Europort, said the new sailings would give “further choice and capacity” alongside Brittany Ferries’s existing services out of Rosslare to Bilbao and Cherbourg.

The launch of the route to and from St Malo is responding in particular to demands from traders looking to ship agrifood and fisheries produce between Ireland and northern France.