Brexit certainty gives businesses a clearer view of the road ahead 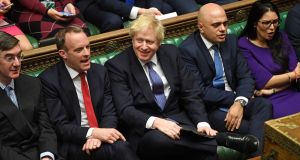 What a difference a general election makes.

After months – indeed years – of wrangling and parliamentary deadlock, the House of Commons this week christened the new decade with a thumping endorsement of prime minister Boris Johnson’s Brexit Bill.

The vote, by 331 votes to 231, made possible by Johnson’s crushing win in the pre-Christmas election, makes certain the UK’s departure from the European Union on January 31st.

The Bill goes to the House of Lords for further scrutiny next week and if it is amended there, it will return to the Commons; but, following this week’s vote, its fate is not in doubt.

While the new political reality in Britain may be difficult for some to swallow – ending, as it does, any lingering hopes of Remainers for Brexit to be stopped – it has nonetheless brought a clarity to the road ahead that must be welcomed.

That being said, the British Irish Chamber of Commerce warned this week that with all the emphasis on how goods will trade between the Republic and the UK after Brexit, the “forgotten child” could be the €46 billion in services trade.

The chamber’s director-general John McGrane said a comprehensive free trade deal covering services – which includes businesses as diverse as retailers, legal practices and banks – could take at least five years to negotiate. Johnson has set a deadline of December 2020.

Revenue, meanwhile, appointed 586 staff to Brexit-related roles last year as the UK’s deadline for leaving the European Union loomed, and said there was a significant increase in the number of businesses sorting out their customs registrations.

On a related note, Bord Bia figures this week showed a record €13 billion in food, drink and horticulture products were exported from the Republic last year, up from €12.1 billion in 2018, but meat and livestock exports both declined.

The UK accounted for 34 per cent of exports last year, down from 37 per cent a year earlier, while the EU made up 35 per cent.

Brexit aside, the economy is also under threat from OECD proposals to shake up the system that allows companies such as Facebook, Apple and Google to book profits and locate patents in low-tax jurisdictions such as the Republic to minimise tax bills.

The State could lose up to €2 billion of its corporation tax revenue under the proposals, Minister for Finance Paschal Donohoe warned. This would remove roughly one-fifth of corporation tax receipts, based on last year’s figures.

In more upbeat news, Nama is to transfer the first €2 billion of an expected €4 billion surplus to the exchequer later this year, while the State has already raised 40 per cent of its minimum 2020 funding target after selling €4 billion of long-term bonds this week.

On the jobs front, professional services firm KPMG will add 800 jobs this year, half of which will be targeted at experienced professionals. Figures this week also showed the number of claimants on the Live Register is at its lowest level since January 2008.

With a general election very much in the offing, the narrative that rural Ireland has been left behind by the Government is likely to be amplified once again – although there was some evidence to support the claim unearthed this week.

Figures in the annual report of IDA Ireland – the body responsible for attracting foreign direct investment – showed it continued to focus heavily on Dublin in terms of the sites it showcased to potential investors.

Trade officials have privately cited Lithuania as one country that wants to copy Ireland’s model. It competes heavily with Ireland in the fintech space and also recently attracted FDI from US multinationals such as Dell.

On the flip side, figures from law firm Baker McKenzie showed Chinese investment into Ireland rose by 56 per cent to $145 million (€130.5 million) last year as FDI in Europe and North America hit its lowest point in almost a decade.

One major investment coming down the tracks will be the establishment of a major European headquarters for LinkedIn at Two, Three and Four Wilton Park in Dublin city centre.

The US tech giant’s decision provides it with the capacity to grow its current 1,200-strong Dublin employee headcount by more than 4,000 workers in the medium to long term. Construction will begin this year and is targeted for delivery in 2023.

Elsewhere, Danish group Obton and Irish company Shannon Energy plan to spend €300 million building plants that will generate electricity from solar power in the Republic, creating about 1,000 jobs in the process.

Willie Walsh to retire this year

The former pilot will leave the company altogether at the end of June after 15 years as chief executive. The group also owns British Airways, Spanish carriers Iberia and Vueling, and will shortly take over Air Europa.

“I have indicated that I’m clearly getting closer to retirement . . . the board has been working for some time, as you would expect, on succession planning,” Mr Walsh said. Current Iberia chief executive Luis Gallego will succeed him.

Finally, T5 Oil & Gas, an Africa-focused explorer founded by a group of Tullow Oil veterans, warned there is a “material uncertainty” over its ability to stay in business for the next year if it fails to raise money to complete a key deal in Gabon.

In spite of this, the UK-based company, led by Irishman Pat Plunkett, said in its 2018 report there was a “reasonable expectation” of carrying out an IPO or finding alternative funding in the first half of this year. It aborted a $45 million (€40.2 million) IPO in 2018.