Life on the run proving expensive for Carlos Ghosn 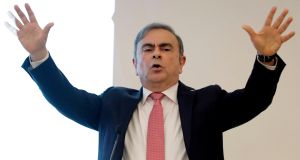 Life on the run is proving expensive for Carlos Ghosn.The cost of his escape included $14 million (€12.6 million) in forfeited bail money while the operation that saw him celebrate New Year’s Eve in Beirut could have cost $15 million or more.

That includes $350,000 for the private jet that spirited the former auto executive from Osaka to Istanbul and millions of dollars for his multicountry extraction that would have taken a team of as many as 25 people half a year to plan, according to a private security expert who said he wasn’t involved and asked not to be identified given the nature of the operation.

Such outflows have seen Mr Ghosn’s fortune shrink by 40 per cent since he was arrested more than a year ago at Tokyo’s Haneda Airport, according to estimates by the Bloomberg Billionaires Index. His fortune is now calculated to be about $70 million, down from around $120 million at the time of his first court appearance a year ago.

In fiery, freewheeling form at a two-and-a-half hour press conference in Beirut on Wednesday, Mr Ghosn, 65, repeatedly proclaimed his innocence against allegations he understated his income and raided corporate resources for personal gain, accused Japanese prosecutors, government officials and Nissan Motor executives of conspiring to topple him, and insisted he would clear his name.

“I am used to what you call mission impossible,” he said in response to questions from the assembled reporters. “You can expect me in the next weeks to take some initiatives to tell you how I’m going to clear my name.”

That might include a tell-all book. Mr Ghosn plans to publish the story of his arrest, according to a report by Japanese public broadcaster NHK.

His downfall has already seen him lose millions in payouts. Last year, Nissan cancelled retirement and stock-linked compensation and Renault said he won’t benefit from a non-compete agreement he signed in 2015 and stock-based payments that were conditional on his staying at the company. Many of the charges against him centre on retirement payments, totalling more than $140 million, which he hadn’t yet received.

That may be just the start. French investigations examining the possible misuse by Mr Ghosn of Renault’s money to host lavish parties and pay consulting fees are at a preliminary stage. The former auto executive also agreed to pay $1 million to settle a civil complaint from the US Securities and Exchange Commission, which said he failed to properly disclose potential retirement payments, without admitting or denying wrongdoing.

At his press conference, Mr Ghosn claimed he had done nothing untoward in hosting an event at the Palace of Versailles. Regarding the SEC fine, Mr Ghosn’s lawyers said previously, “We are pleased to have resolved this matter in the US with no findings or admission of wrongdoing.”

Nissan is looking at bringing legal action against Mr Ghosn in Lebanon, people familiar with the company’s plans said, to recover money it claims he used improperly. The carmaker is trying to evict him from the pink villa in Beirut to which he still has access. Nissan purchased it for $8.75 million, renovated it and furnished it for him, according to a person familiar with the matter.

“Ghosn’s flight will not affect Nissan’s basic policy of holding him responsible for the serious misconduct uncovered by the internal investigation,” the Yokohama-based automaker said on Tuesday.

Authorities may be looking to seize some of his assets. In Switzerland, where Mr Ghosn reportedly banks with Julius Baer, Swiss authorities received a legal-aid request from the Tokyo District Attorney’s Office a year ago, a spokeswoman for the agency that received the notice said. It examined the request before forwarding it to the Zurich prosecutor’s office in March. A spokesman for the Zurich prosecutor’s office declined to comment on the nature of the request or what they are doing with it. At Japan’s request, Interpol issued a so-called Red Notice in Mr Ghosn’s name, making it known to other law enforcement authorities that the country considers him a fugitive. Lebanese prosecutors issued a travel ban for Mr Ghosn and asked him to hand in his French passport after the notice was issued, the Associated Press reported.

It’s not clear if any of Mr Ghosn’s assets have been seized. In criminal court cases in Japan, a defendant’s assets cannot be confiscated until a court verdict is reached, according to Taichi Yoshikai, a law professor at Kokushikan University. Assets can only be frozen if they are linked to certain types of offenses, related mainly to organized crime, and a judge determines that they are likely to be seized in case of a guilty verdict, he added.There are exceptions in civil cases, but it’s unclear how this will be applied when a defendant is overseas, he said.

The Tokyo District Public Prosecutors Office, which rarely makes public comments, posted an English-language statement on its website Thursday saying Mr Ghosn had only himself to blame for his strict bail conditions. It vowed to bring him to justice in Japan. Mr Ghosn had been “propagating both within Japan and internationally false information on Japan’s legal system and its practice,” Justice Minister Masako Mori said.

Bloomberg’s calculation of Mr Ghosn’s net worth assumes none of his assets at the time of his arrest - which included shares in Renault and Nissan now valued at about $60 million - have been seized or sold.

Even if that is the case, the costs that come with being the world’s most famous runaway will continue to be formidable. Legal bills for fugitive Malaysian financier Jho Low came to $15 million, according to an October deal with US federal prosecutors. Efforts to burnish Mr Low’s reputation cost $1.1 million over seven months, according to the New York Times. Such expenses are likely sizeable enough to pressure even a fortune as large as that of the Ghosn family. Still, some costs may be lower than expected. The $350,000 contract for Mr Ghosn’s Osaka to Istanbul flight was to be paid in two tranches. The charter company has so far only received the first half. – Bloomberg