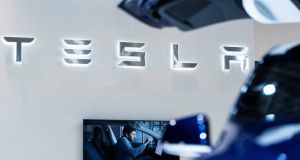 Tesla’s growth potential in China means the stock is undervalued even after a recent rally, analysts at Piper Sandler said while boosting their target price by more than 30 per cent.

Piper raised its target to $553 from $423, making it one of the most bullish among forecasters tracked by Bloomberg. The stock has doubled in the past three months, closing at a near-record $481.34 on Thursday.

The electric-vehicle maker started delivering its China-built Model 3 sedans to local customers this week, a year after its first factory outside the US broke ground.

“Bottom line: if Tesla’s Model 3 market share in the United States can be replicated in China – and if this logic extends also to Model Y – then Tesla’s annual volume in China alone would eventually exceed 650,000 units,” Piper analysts led by Alexander Potter said in the note.

Last year Tesla delivered a record 367,500 vehicles globally. The company faces stiff competition in China from BMW, Daimler and Volkswagen’s Audi, making it unclear if it can replicate its US success in the country, Piper said. – Bloomberg