Business Week: also in the news were exports; Trump; Brexit; and house prices 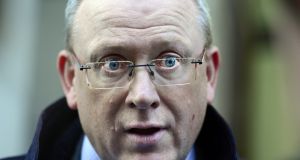 If you’re a banker, the timing this week of the fine imposed by the Central Bank of Ireland on Permanent TSB – its biggest ever – was unfortunate, to say the least, just as the Department of Finance is mulling a report on lifting pay caps in the sector.

The regulator fined PTSB €21 million for the “unacceptable harm” it caused certain tracker mortgage customers, including some who their lost homes, when it wrongly denied them their discounted rate.

The fine was originally set at €30 million but discounted by 30 per cent due to the bank’s co-operation on a settlement scheme. Trackers were commonly sold during the peak years of the Celtic Tiger, but they proved heavily loss-making for banks in the crash.

PTSB admitted 42 separate regulatory breaches, from 2004 onwards. More than 2,000 accounts were affected, of which 12 lost their family homes and 19 their buy-to-let properties.

The fine is unlikely to hold the record for largest ever for too much longer, with all the main banks under investigation by the Central Bank. Industry sources estimated that they could collectively face fines up to about €350 million when all is said and done.

All the while, politically controversial proposals to lift the €500,000 cap on bankers’ pay – imposed by Brian Lenihan in 2009 – continue to rumble on. Minister for Finance Paschal Donohoe has received a report and advice from the Central Bank on the matter.

“We are seeing large chunks of senior management in the banks in which we have shares being taken out and go for higher pay elsewhere,” department secretary general Derek Moran told an Oireachtas committee this week.

Meanwhile, it was officially confirmed that Central Bank governor Philip Lane is to be the European Central Bank’s next chief economist. The new posting takes effect from this weekend when he joins the ECB’s executive board.

In something of a headache for the Government, his replacement, Gabriel Makhlouf, is under pressure to resign in his final weeks as head of the New Zealand treasury.

Makhlouf (52) is at the centre of a controversy involving leaked budget details, when he claimed his department had evidence it was the subject of a deliberate and systematic hack.

The police, who were called in to investigate, said there was no evidence of illegal activity, indicating instead that the department’s web search tool was used to access the embargoed information. Unfortunate timing for Makhlouf and the Government.

As if things weren’t awkward enough, the US treasury set the scene nicely for the visit for US president Donald Trump to Ireland next week after it included us on its watchlist for unfair economic practices.

The Department of Finance was quick to defend the Republic’s trade relationship with the US, saying that while we run a large goods trade surplus, “we simultaneously run a large services trade deficit”.

Separately, the Republic’s economy was ranked as the world’s seventh most competitive, reversing a sharp decline last year when it slipped out of the top 10 due to challenges, including Brexit.

The survey of 63 countries, compiled by the IMD business school in Switzerland, is based on an analysis of more than 235 indicators derived from four main factors: economic performance, government efficiency, business efficiency and infrastructure.

New figures from Enterprise Ireland showed exports by its clients reached a record high of €23.8 billion last year, with most markets, including the UK, growing despite Brexit and trade uncertainty.

However, exports to Asia Pacific, a market on which the agency is increasingly focused, dipped 0.2 per cent to €2 billion, something that was described as “disappointing” by chief executive Julie Sinnamon.

While the clamour to combat climate change has been growing in recent months, a report by Ibec this week said we will need €40 billion of capital investment over the next 30 years to build a low-carbon economy.

Meanwhile, all we seem to keep hearing these days is how the threat of a no-deal Brexit has never been higher. The Government is to outline how a scenario would impact the next budget within weeks, and it isn’t going to make for pretty reading.

It will include warnings that resources for tax cuts and spending increases next year will be “vastly reduced” if the UK leaves without a deal. Minister for Finance Paschal Donohoe has already said it would result in a 2 per cent increase in unemployment.

More houses in the pipeline

Ballooning house prices were in the news again this week, but it also emerged that Nama could seek partners within weeks to build thousands of new homes out on its site on the Poolbeg peninsula in Dublin.

The State agency, which bought boom-era property loans from our domestic banks following the crash, predicted it would earn a €4 billion surplus once its work is complete, a sum that would be passed to the exchequer in 2020 and 2021.

Nama chief executive Brendan McDonagh said it would begin seeking partners to develop Poolbeg West in Dublin, which will hold 3,500 new homes, “in the next six to eight weeks”.

It’s a case of the sooner the better, as a new report by Moody’s showed Dublin house prices rose at almost nine times the rate that workers’ income grew over the past six years, putting it among the European cities where people can least afford to buy a home.

It stated that Dublin property prices rose by almost 90 per cent between the bottom of the market in 2012 and 2018, but disposable income only grew by 10 per cent “about 80 percentage points less than house-price inflation”.

However, the report signalled that there may be light at the end of the tunnel for would-be housebuyers in the form of an increase in wages, driven by strong demand for workers, that will make houses in Dublin slightly more affordable in coming years.

1 In this strangest of recessions, what happens next for Ireland?
2 Bank of Ireland sees about 2,000 staff apply for voluntary redundancy
3 Michael O’Leary is the boss you want to lead an airline out of crisis
4 Best Covid-19 ‘influencers’ will avoid hectoring
5 Estée Lauder staff at Dublin airport plan further strike action
6 Fortnite owner signs multimillion deal to buy Irish ‘kidtech’ firm
7 Overhaul of lease arbitration regime would be a game changer for retailers
8 Ireland’s Covid-19 economy in five graphs
9 Minister seeks AG’s advice on banker accountability laws
10 Should I switch bank now with Ulster Bank at risk of closing?
Real news has value SUBSCRIBE