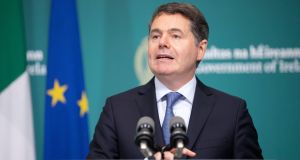 The European Commission opened up a new front to target low-tax member states on Wednesday, as its decision that Apple had received €13.1 billion in illegal tax aid from the Republic was overturned by the EU’s highest court.

The EU General Court’s ruling that the commission did not prove Apple had received unfair tax advantages from the State over a decade to 2014 has hardened Brussels’ resolve to tackle “aggressive” taxation, Economy Commissioner Paolo Gentiloni said.

Among proposals is a plan to use a never-before triggered clause in EU treaty law – known as article 116 – that would allow the commission to act against member states whose tax policies are deemed to be distorting competition in the single market. Such a move would require only a qualified majority of EU member states and backing from European Parliament, and get around normal national vetoes on tax matters.

The announcement came on the day the General Court overruled a 2016 commission decision that Apple had received unfair state aid from the Republic, a landmark case in the EU’s efforts to clamp down on what it sees as anti-competitive behaviour by member states and some of the world’s biggest tech groups.

While the court did not provide a clear-cut vindication of Apple’s tax affairs in Ireland, it said there were “inconsistencies” and “defects” in the methods used in Revenue “rulings” in 1991 and 2007 on what Apple profits were taxable in the State, even if a case of unfair advantage was not proven.

The Government and Apple were quick to welcome the verdict, even though the commission has a little over two months to lodge an appeal with the EU’s highest court.

“Much of the criticism levied at Ireland in relation to how we have handled the taxation matter has been given a very comprehensive answer today,” Minister for Finance Paschal Donohoe told reporters. “This is a matter that has caused reputational difficulty during the many years in which it has played out.”

Mr Donohoe said he had not had a chance to review the EU proposals in detail. A Department of Finance spokeswoman subsequently said the Government “has always been clear that unanimity is the appropriate voting system for any tax proposals at EU level”, but that it would await further details on the plan.