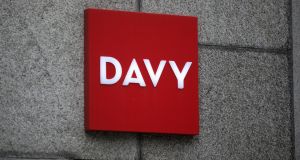 Davy’s gang of 16 could face personal sanction from the central bank now that the regulator has found against the stockbroker and imposed a record €4.1 million fine over a rogue bond deal that saw the group operating on the other side from Davy’s client without his knowledge, writes Joe Brennan. Three of the firm’s top management have resigned after being named in The Irish Times and interim chief executive, Bernard Byrne now faces a battle to convince clients and staff that Davy stockbroker can rebuild trust

Ireland is forecast to have thehighest government debt per head of population in Europe this year, as the impact of Covid-19-related borrowings pushes the burden on each Irish man, woman and child to €48,291, almost €20,000 ahead of the EU average. Fiona Reddan has the details.

Closing Dublin to new data centres is among proposals that national electricity grid operator Eirgrid will table in a consultation on the system’s future development, writes Barry O’Halloran. The network operator will also consider laying a €2 billion power line around the coast and dictating where future wind farms will be built.

Tech companies founded by women in Ireland raised more than €100 million in funding last year for the first time, according to new figures published to coincide with International Women’s Day. Charlie Taylor reports.

Goldman Sachs boss David Solomon didn’t mince his words. Home working is “an aberration that his firm is going to correct as quickly as possible”, he says. But, asks Emma Jacobs, do young people really need to go back into the office?

And Chris Johns looks warily as politicians eye up a post-Covid crisis economy and begin to warn of the need to tighten belts. This, he argues, is a time to grow the economy not focus on cutting borrowing.