Cost of Covid-19 restrictions to leave debt per head of almost €20,000 over EU average 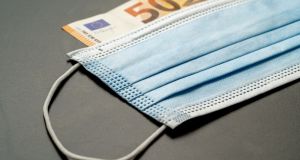 Irish public borrowing has ramped up over the past year to cope with the cost of the Covid-19 pandemic. Photograph: iStock

Ireland is forecast to have the highest government debt per head of population in Europe this year, as the impact of Covid-19-related borrowings pushes the burden on each individual in the State up by almost €4,000 in 2021.

It means that, per capita, the Irish will shoulder a debt burden of almost €20,000 more than the EU average.

According to figures from the European Commission, Ireland is forecast to have total government debt of €241.6 billion for 2021, up by almost 10 per cent on 2020. When considered on a per-person basis, this means that the debt burden will be € 48,291 this year, the highest across the European Union and the UK.

The figures also show that Ireland has experienced the sharpest increase in debt per head over the past year, up 9 per cent, or €3,919, on 2020.

The second-largest increase is France, where the debt burden is to rise by €3,013 per head of population this year. As a comparison, debt per capita is expected to rise by €2,158 per person in the UK this year, and by €954 in Germany.

In 2022, Belgium is forecast to overtake Ireland as the country with the largest debt burden per head of population, at €50,441, compared with Ireland’s €49,800.

Irish public borrowing has ramped up over the past year to cope with the cost of the Covid-19 pandemic, with Ireland cited as having the strictest response by a recent Oxford report.

With the pandemic unemployment payment alone costing the State about €140 million a week, and with more than €6 billion spent on wage subsidies since the start of the pandemic, public debt has grown accordingly.

Since 2013, however, it had largely been on downward trajectory until Covid hit.

For Austin Hughes, chief economist with KBC Bank Ireland, it is not necessarily the metric of debt that’s important, but rather a country’s capacity to repay.

While it’s “undoubtedly the case that debt per capita is elevated”, he says Ireland, given that its income per head is also relatively high compared with most other economies, is in a good position to shoulder it.

“In that respect, our capacity to weather this is significant,” he says. Based on an annual servicing cost of about €4 billion a year, he said the per-capita burden of the State’s debt was about €800.

“Provided you’re doing the right thing, and in this instance it is unquestionably the right thing [to borrow to support the economy], in that respect, you’re actually increasing the capacity of future generations to pay the burden of the interest on it.”

The risk may come in the form of rising interest rates in future, something alluded to last week by Minister for Finance Paschal Donohoe, who said that the greater the public debt, “the more painful any increase in borrowing costs will be”.