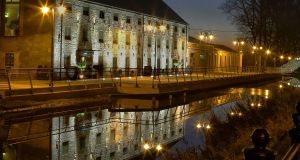 Revenues for the company behind Tullamore Dew rose from €30.3 million in 2016 to €37 million last year as the company gained from the huge interest in Irish whiskey globally

Losses at the Irish subsidiary of Scottish drinks group William Grant & Sons almost halved in 2017, a year in which bottling of Tullamore Dew whiskey transferred to the company’s €35 million distillery in Co Offaly.

William Grant, which acquired Tullamore Dew, along with three other spirits, from Irish drinks group C&C in 2010 for €300 million, reported a pre-tax loss of €698,000 last year. This compared to a loss of €1.34 million a year earlier.

Revenues rose by 22 per cent to €37 million as the company benefitted from the huge interest in Irish whiskey globally.

Whiskey production returned to Tullamore for the first time in 60 years in 2014 when William Grant opened a multimillion-euro distillery on the outskirts of the town.

The Tullamore distillery is undergoing a €25 million expansion. Global sales of Tullamore Dew and its variants rose by 9 per cent last year to about one million cases and it is the second-biggest Irish whiskey brand after Jameson.

Since it opened, the distillery has doubled capacity to produce 3.64 million litres of alcohol of triple distilled pot still and malt whiskey annually.