Whiskey sales still strong in US as alcohol consumption declines 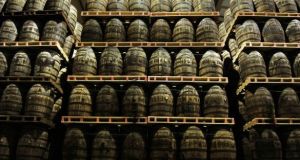 Irish whiskey sales rose 13.5 per cent to 4.65 million cases, down from 16.3 per cent a year earlier but still strong considering the overall trend towards lower consumption.

According to preliminary data from International Wine and Spirits Research (IWSR), Irish whiskey was the second fastest growing brown spirit last year after Japanese whiskey, which recorded a 23.1 per cent increase in sales 2018, although from a low base.

Irish whiskey has continued to record double-digit growth in its biggest market despite alcohol consumption declining for the third consecutive year. Nonetheless, there will be concern that growth is slowing in the US, having hit 19 per cent in 2015 when sales of 3 million cases were surpassed.

The Irish Times recently reported that rival whiskey producers are teaming up to access EU funding to carve out opportunities in China and Japan as they look to ease their dependence on the US for exports.

Whiskey sales were up 4.1 per cent overall although it was outshone by other spirits such as tequila, which was up 8.5 per cent and mezcal, which saw a 32.4 per cent leap in sales, albeit from a low base.

Beer, which at 2.62 billion 9-litre cases has long dominated the alcohol market in the US, was down 1.5 per cent in 2018, while cider and mixed drinks reversed their decline from 2017 to post increases of 4.1 per cent and 6.1 per cent respectively. Wine sales grew slightly at 0.4 per cent.

“Spirits and wine showed slight growth in 2018, but those category increases weren’t as high as previous years. It’s clear that Americans are drinking less overall, which is likely a result of the continued trend toward health and wellness,” said Brandy Rand, IWSR’s US president.