Study calls for overhaul of western diet to help environment

The rise of the vegan diet has helped highlight the choices we make in the restaurant or kitchen. But what is the best diet for you, and how can your choices help save the planet. Video: Kathleen Harris 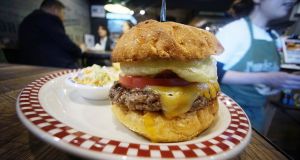 Meat consumption in western countries such as Ireland may need to drop by 90 per cent to avert a climate catastrophe and reverse the current obesity epidemic, a new study has warned.

The research by 20 influential food scientists, published in the Lancet Medical Journal, suggests the global food system is unsustainable and driving the planet towards environmental destruction while simultaneously leaving billions of people either underfed or overweight.

It calls for a radical reduction in the consumption of meat and dairy in favour of plant-based alternatives.

Its “healthy, sustainable reference diet” would involve a complete restructuring of the average Irish person’s diet with beef and lamb consumption reduced by 90 per cent to just 7g a day, which is equivalent to roughly half a meatball.

People would also be limited to 7g of pork a day, equivalent to a single cocktail sausage, and just 29g of chicken or one and a half chicken nuggets.

Dairy consumption would also be curtailed to just one glass of milk a day (250ml) or less if you consume cheese or butter.

To get the required daily intake of calories, people would be expected to eat almost 18 times as much dry beans, soy and nuts.

To promote the shift to a healthier diet based on a more sustainable food system, the study by the Eat-Lancet Commission, a collaboration of the Oslo-based Eat foundation and the Lancet Medical Journal, proposes a raft of measures including the introduction of a meat tax akin to the sugar tax and the withdrawal of certain products altogether.

“The environmental and societal health costs of food supply consumption should be fully reflected in pricing by introducing taxes,” it said.

Its recommendations, if adopted, would have major implications for the Republic’s €12 billion food and drink industry, which is heavily centred on beef and dairy production. Beef is the single largest component of this trade worth €2.5 billion annually to the Irish economy.

Responding to the report, an Irish Farmers’ Association (IFA) spokesman said we have very efficient food production systems in Ireland from a climate perspective.

“We are the most carbon-efficient dairy producer in Europe and among the top five in beef,” he said. “Proteins from beef and dairy are an important part of a balanced diet.”

Taoiseach Leo Varadkar stoked controversy this week by revealing he was cutting back on his meat intake for health reasons and to reduce his carbon footprint. Rural TDs and food industry representatives described his comments as unhelpful given the Brexit threat already hanging over the farming sector here.

The global food system accounts for about a third of all carbon emissions, which is more than all emissions from transport, heating and lighting.

“Unhealthy and unsustainably produced food poses a global risk to people and the planet,” the report said.

“More than 820 million people have insufficient food and many more consume an unhealthy diet that contributes to premature death and morbidity,” it said. The study warned that global food production was exerting the greatest pressure on the Earth’s ecology and stability.

It said the transformation to healthy diets from sustainable food systems was necessary to achieve the UN Sustainable Development Goals and the Paris Climate accord.

In response to the report, Meat Industry Ireland, the industry body that represents meat processors here, said: “There is extensive scientific evidence to prove the benefits of meat consumption as part of a healthy balanced diet for citizens.”

It also noted that Ireland’s grass-based food production systems provided the State with a natural competitive advantage to convert this grass feed into high-quality, nutritious meat protein, and that Irish meat production systems were “far more sustainable than in other regions of the world”.

Christopher Snowdon, head of lifestyle economics at the London-based Institute of Economic Affairs, said: “Most people will look at these demands and laugh, but I welcome this report because it reveals the full agenda of nanny state campaigners.”

The European Dairy Association played down the report’s implications, saying it had gone to the extreme “ to create maximum attention”.