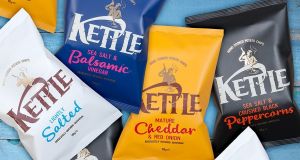 A selection of Kettle crisps, which are set to be acquired by Irish food group Valeo from the Campbell Soup company.

Valeo Foods, backed by Cavan dealmaker Seamus Fitzpatrick, is in exclusive talks with Campbell Soup to buy the UK and Irish arm of the company behind Kettle crisps and Metcalfe popcorn for more than £50 million (€54 million), it is understood.

Discussions are at an advanced stage to buy Kettle UK, which would take to more than a dozen the number of acquisitions Dublin-based Valeo has made since it was founded with backing from Mr Fitzpatrick’s Capvest in 2010.

Campbell hired Barclays earlier this year to sell the global operations of Kettle after pressure from an activist shareholder, which pushed for the disposal of non-core assets to cut debt and reduce costs. Valeo is not in discussions to buy Kettle’s operations outside of the UK and Ireland.

Valeo’s prospective deal for Kettle UK , first disclosed by Sky News, may spark a new phase in the Irish company’s strategy of consolidation in the Irish, UK and European ambient foods space.

It signals Valeo’s intention to open up a new platform for the group, in the snacks sector. This would be the fifth seam to the business, after its original Irish focus, then its move into the UK, then Europe, and the fourth distinct string to its bow, a pan-European confectionery business.

Other major deals closed by Valeo in recent years include its €110 million purchase last year of confectionery group Tangerine, whose brands include sweetshop favourites such as Fruit Salads and Refreshers.

The company, run by former Aer Lingus executive Seamus Kearney, declined to comment on the ongoing negotiations for Kettle. Valeo’s annual sales are more than €870 million, while Kettle’s sales last year were about £51 million (€55 million).