Profits increased more than a third on revenue of €157m 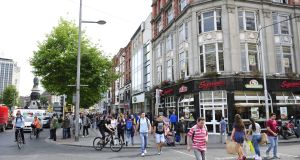 Supermac’s on O’Connell Street in Dublin.

Galway entrepreneur Pat McDonagh plans to sell off his remaining pubs in the US Midwest in the coming years.

Speaking to The Irish Times, Mr McDonagh said that some have been sold and he’s planning to sell more. “It’s difficult to run them from over here and we’ve a lot to do over here,” he said.

Mr McDonagh was speaking after recently filed accounts show the group he owns with his wife, Una, increased profits by more than a third.

Pre-tax profit at the company which has interests including the Supermac’s fast-food chain, hotels and a series of property investments were up 37 per cent last year to €21.8 million

Sales were 15 per cent higher at €157 million, driven by the motorway service stations and Supermac’s outlets.

Apart from Mr McDonagh’s fast-food outlets, his empire includes a series of hotels, including the Killeshin hotel in Laois, Castletroy Park Hotel in Limerick, the Charleville Park in Cork, Lough Rea hotel in Galway and the Athlone Springs which was acquired this year.

Mr McDonagh expects to acquire another hotel in the new year, he said.

Mr McDonagh and his wife, who own the business on a 50/50 basis, now employ more than 1,600 staff, not including the employees of Supermac’s franchises. The company’s wage and salary bill increased to €31.6 million last year after it added 88 staff.

Supermac’s Holdings had bank loans of €14 million to repay after one year, down by €2 million on the previous year, while Mr McDonagh was owed €7.9 million.

He said he has been looking to expand his portfolio of motorway service stations, and is still involved in a bid to obtain planning permission for a major complex off the M18 near Ennis in Co Clare. The proposal has attracted some controversy and was put on hold in September.

“I wouldn’t give up hope for Ennis yet,” he said, adding that he’s optimistic the group will get planning permission there.

The company has permission for further stations in Longford and recently got permission in Portlaoise. However, a competitor has appealed that decision.

Mr McDonagh already operates a service station off the M6 in Galway, as well as the “Obama Plaza” off the M9 in Offaly.

Commenting on trading so far in 2018, Mr McDonagh said there was “decent growth in revenues” coupled with a positive tourist season.

For 2019, he said costs will likely rise between 8 and 10 per cent because of a mixture of factors including increasing VAT, labour costs and food prices resulting from adverse weather this year.