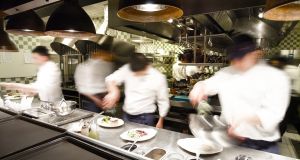 Dalata hotel group is backing the Chef’s Network charter, which sets out a series of principles such as prioritising work-life balance, encouraging collaboration and treating staff with respect. Photograph: Getty Images

Ireland’s largest hotel group, Dalata, is among the catering and hospitality employers backing a new workplace charter for chefs, designed to create a positive working environment and address negative perceptions about the sector’s working conditions.

Chef Network, an industry network of 3,100 chefs in Ireland, last week formally launched the charter, which sets out a series of principles such as prioritising work-life balance, encouraging collaboration and treating staff with respect.

It is estimated that the republic has a shortage of up to 8,000 chefs, with the industry forced to look abroad to fill many roles.

Chef Network believes the adoption of the charter by chefs and their employers may help to address some of the issues and perceptions, ultimately making it easier to retain chefs and attract new entrants into the profession.

Chef Network was established in 2016 by the Irish Foodservice Suppliers Alliance. Ruth Hegarty, the network’s head of community, said the idea for a charter arose during a gathering of chefs at an event in Galway run by the network.

“There is a big shortage of chefs, and we asked ourselves: why is that? One element is negative behaviours, but many of the negative perceptions about working as a chef are also skewed by representations in the media,” she said.

“We’re trying to counteract that Gordon Ramsay effect. When he is on television, he is a caricature playing a role onscreen. Someone at the Galway meeting suggested we draw up charter aimed at making cultural changes in kitchens.”

Ms Hegarty acknowledged that some of the negative perceptions about working as a chef, such as a highly pressurised working environment with long and unsociable hours, are based upon reality.

“We all know that still exists to some degree. But not to the same extent it used to in the past,” she said.

Initially, it is envisaged that individual chefs will sign up to the charter.

“But business owners and general managers are where we need to go. Dalata has already come back to us to say it wants to be involved. Some of the big contract catering companies have also given their support,” she said.

Ms Hegarty said there is an acknowledgement within the industry that more women need to be encouraged to train as chefs.

“If we make the industry better for everyone, we will make it better for women. And if we can attract more women, it may improve the working environment for everybody else too,” she said.

Apartments row, Ires to continue building in Dublin, and hotel occupancy rates 06:41
1,800 homes sign up as WiredScore rolls out build-to-rent certification 05:30
‘It is the environment that is really changing how we spend’ 05:20
Best career advisers know plans not built to last 04:59
Boyd Gaming casinos boosted by deal with Paddy Power owner 04:46

1 Bank leaked my loan request to family who tried to rip me off
2 Ryanair and Aer Lingus monitor impact of coronavirus on travel to Italy
3 1,800 homes sign up as WiredScore rolls out build-to-rent certification
4 Apartments row, Ires to continue building in Dublin, and hotel occupancy rates
5 Mastercard to create 1,200 new jobs by expanding base in Dublin
6 Hotels outside Dublin hardest hit by tourism slowdown
7 Boris Johnson's new immigration regime will damage much more than industry
8 ‘It is the environment that is really changing how we spend’
9 Best career advisers know plans not built to last
10 Ires hires contractor to build more than 60 apartments close to Croke Park
Real news has value SUBSCRIBE