Irish Times Business Awards, in association with KPMG, will be held in September as a virtual event 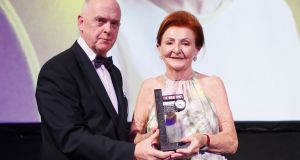 Some of the country’s leading business people and companies have been selected for the third annual Irish Times Business Awards, which are being held in association with KPMG.

To date, 16 business leaders have been chosen to vie for the Business Person of the Year award, sponsored by KPMG.

They will be joined by the winners of the Business Person of the Month awards for June and July.

The nominees for Company of the Year, sponsored by KPMG, are An Post, in recognition of its successful pivot from letters to parcels and its excellent work in keeping its services operating during the Covid-19 lockdown; Irish Distillers, which enjoyed another year of strong growth for its key spirits brand Jameson whiskey; and Fenergo, a fintech recently valued at $800 million and on a strong growth trajectory.

For Deal of the Year, the shortlist comprises Pointy, the Irish tech company acquired in January by Google for a reported $160 million; computer chipmaker Decawave, which was sold for $400 million to US-based Apple supplier Qorvo; and Green Reit’s €1.34 billion sale to Henderson Park, a near 25 per cent premium to its share price.

For Local Enterprise of the Year, sponsored by Eirgrid, the nominees are Skmmp, an Irish virtual fashion business; Shorla Pharma, a Tipperary-based healthcare start-up that develops therapies to help cancer patients; and Nolan’s of Clontarf in Dublin, a top class independent local retailer that has expanded significantly this year.

This award was won last year by Strong Roots.

A Distinguished Leader in Irish Business award will also be presented at the ceremony to a leading Irish entrepreneur or executive. Breege O’Donoghue, a senior executive of Primark/Penneys, received this award last year.

The Irish Times Business Awards will be hosted in early September as a virtual event.