The Irish Times Business Person of the Month: Michael Burke 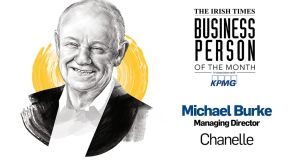 Chanelle Pharmaceuticals chief executive Michael Burke has been chosen as The Irish Times Business Person of the Month for June, an award run in association with KPMG.

Galway-based Chanelle is one of the largest manufacturers of generic veterinary medications in Europe, as well as being a significant supplier for the human generic medicines market.

In June the company broke into the US market in a significant departure for 72-year-old founder Michael Burke, shipping its Spot On parasite protection product for cats and dogs from its Loughrea base.

The global market for flea, tick and heartworm products was estimated at $3.3 billion in 2018, with North America accounting for about $1.3 billion of that. Chanelle is one of only two European companies with a licence to export the products to the US.

It marked the culmination of a five-year process. Mr Burke first announced plans to invest €10 million in a facility dedicated to supplying the US market from Loughrea in early 2016 and spent two years securing US marketing approval from the Food and Drug Administration.

Mr Burke, a former vet, first moved into manufacturing in the 1980s after growing frustrated with delays in securing supplies for farmer clients.

He is expanding the business again, investing €11 million in another manufacturing plant in the Galway town, also for the US market.

He will now go forward as a candidate for the Business Person of the Year Award.