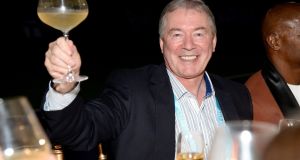 Jim Clerkin joined Co-operatoin Ireland when still working in Ireland in 1994 and founded a chapter on the US west coast in San Francisco three years later. Photograph: Michael Kovac/Getty Images for Moet and Chandon

Jim Clerkin wants to put an organisation he heads out of business. The chief executive of Moët Hennessy North America chairs Co-operation Ireland US, the North American arm of the organisation originally established to aid peace in the North by promoting cross-Border relations.

“I’ll tell you what,” he says on the phone from New York, “I want to close it down, because it means that we do not need it any more. We’ll have full reconciliation.”

Until then, the Co Down-born businessman vows that Co-operation Ireland will remain a non-religious, non-political group that wants to create an atmosphere where those of all persuasions on this island can work together.

The non-profit organisation that promotes peace and reconciliation was the brainchild of Shannon Duty Free founder, the late Brendan O’Regan, who set up Co-operation North in 1978 to foster cross-Border relations. In 1998, it changed its name to Co-operation Ireland to reflect a new emphasis following that year’s peace accord. Clerkin was on the board at the time.

He joined when still working in Ireland in 1994 and founded a chapter on the US west coast in San Francisco three years later. In 2004, he became chairman in New York. President Michael D Higgins and Queen Elizabeth are the organisation’s patrons and Clerkin says that both are hugely supportive of its work.

Co-operation Ireland is gearing up to mark 20 years of Northern Ireland’s Belfast Agreement peace deal in New York with an event next week that Minister for Foreign Affairs Simon Coveney will address.

Even as it prepares for that, the power-sharing arrangement that sprang from the historic agreement is suspended, leaving full reconciliation looking some distance away.

Clerkin has been watching as the British and Irish governments tried to bridge the gap between Sinn Féin and the Democratic Unionist Party, the main protagonists in the row that has mothballed the Northern Ireland Assembly and Executive. Talks to restore power sharing collapsed again this week.

He believes that the political stability that should flow from the restored institutions is critical to Ireland as a whole. “It’s very important the British government, the Irish Government work very closely together to get the outcome that we want,” he says.

The peace and stability that followed the Belfast Agreement helped boost the economies on both sides of the Border. Clerkin points out that this has rendered Northern Ireland unrecognisable from the place that was once in the grip of the Troubles.

“My daughter Rachel is 32, she lives in Belfast and she said to me recently ‘Dad what was it like?’ The new generation does not know about the Troubles, they are gone 20 years,” he says.

“If you look back 20 years ago, who would ever have believed that the tourist trade in Northern Ireland would have been booming? In Belfast, you have five new hotels, the Titanic quarter with its bars and hotels. You’ve got a vibrant city now as a consequence of peace.”

Nobody, he believes, wants to go back to the Troubles. However, the UK’s vote to leave the EU is now seen as a potential threat to both the peace and the prosperity that followed. Fears remain that a hard border will once again cut the North off from the rest of Ireland.

Clerkin is more optimistic than most about Brexit. He argues that nobody knows what is going to happen and that the signs so far indicate that it is not putting investors off the North.

Tax represents another challenge, more from the Republic’s perspective. Both the Organisation for Economic Co-operation and Development and the EU are considering changes that could affect how investors here structure their tax liabilities.

At the same time, the US Congress recently passed reforms proposed by president Donald Trump designed to lure capital back from locations including Ireland. Clerkin agrees that the 12.5 per cent charge on company profits, along with the structures offered by the Republic, attracts investors but argues that they are not the only draw.

“Here’s what I think, the companies that set up have been very successful, they may have moved to Ireland for the tax benefits, but they stay because they are impressed with the work ethic of the people of Ireland North and South,” he says. “They are recognising that being in Ireland has many, many benefits other than just the tax benefits. It’s more about the workforce, the young, really well educated workforce.”

To illustrate this, he says that he brings interns from Ireland to the US to work on brands such as Dom Pérignon and Hennessy. When they go, their managers always say that they will be missed. “They impress everybody,” he says.

From Guinness to Dom Pérignon

Clerkin must have impressed a few people in his time. He grew up on a pig farm in Rostrevor, at the foot of the Mourne Mountains in Co Down, with seven brothers and sisters, “a typical big Irish family”. He began his career with Guinness, where he says John Lavery, the brewer’s popular Northern Ireland managing director, took a liking to him.

Clerkin rose to become an executive and to join the board of directors. “I must say that in 17 years with Guinness I got the most sensational training, that training never left me,” he recalls.

In 1994, Grand Metropolitan recruited him to lead its Irish wine and spirits division. He merged the northern and southern businesses to create Ireland’s second-biggest wine and spirits company.

Guinness merged with Grand Metropolitan in 1997 to form Diageo. Three years later Clerkin went to California to run the new group’s wine and spirits division in the western US, overseeing sales, marketing and distribution across 14 states.

In 2003, Allied Domecq hired him as president of North America and Canada, where he oversaw double-digit growth in sales and profits for three years. Following Allied’s takeover he was appointed chief executive of Jim Beam for Canada, Mexico and the US.

Then in 2008, Moët Hennessy the wine and spirits division of French luxury goods group, LVMH (Louis Vuitton Moët Hennessy) recruited him as executive vice-president and chief operating officer of Moët Hennessy US, giving him responsibility for such brands as Moët & Chandon, Dom Pérignon and Veuve Clicquot champagnes, Hennessy cognac and Belvedere vodka.

Clerkin always wanted to work with brands as powerful as those in the LVMH stable, but never thought it possible when he began his career, or when he left Belfast in the 1990s.

“I’m 10 years with the company,” he says. “I have never seen a company take such a long-term view as this group, we take a 10 or a 20-year view in fact. We don’t look at profits every week or every month, but we continue to invest heavily in the brands.

“We have just completed our sixth record year here. We are the fastest-growing medium to large wine and spirits company in North America.”

The US contributed 32 per cent - €1.62 billion - of the €5 billion sales that LVMH’s wines and spirits businesses earned last year. That share grew from 31 per cent in 2016 in the face of a weaker dollar.

Wines and spirits accounted for €1.56 billion of the overall group’s €8.3 billion profit.

Along with wine and spirits, the France-based business is home to brands such as Louis Vuitton luggage and handbags, Givenchy perfumes, Hublot watches and Bulgari jewellery.

Another growth story that has caught Clerkin’s eye is Irish whiskey. The spirit would have struggled to sell half a million cases worldwide when he started his career but is now enjoying a renaissance.

“I am just delighted to see the revival of Irish whiskey,” he says. “It’s just fantastic what’s happened in the last 10 years. There are 17 distilleries being constructed in Ireland. I must give credit to Jameson. They have created an Irish whiskey sector. I have very high hopes for Irish whiskey.”

Does he have any advice for new whiskey distillers seeking to break into the US market?

“They need to be in with one of the big distributors,” Clerkin stresses. “You must have the product and you must have the distributor. Distribution is largely dominated by 10 wholesalers who have $17 billion of revenues. A company that size does not need you. That’s going to be key. They have to like the product, you need great packaging, great whiskey and a great story.”

While Co-operation Ireland will be toasting 20 years of peace, next week’s event, takes place over two days, February 21st and 22nd, and involves more than celebrations.

Coveney will be a keynote speaker, while former taoiseach Bertie Ahern and former-US senator George Mitchell who played a key role in the peace process, will take part in one of the panels. Irish Consul General Ciarán Madden and his British counterpart, Antony Phillipson, will also take part.

Does Clerkin think he will ever get to close Co-operation Ireland down? “Well I have got four children and my daughter lives in Northern Ireland with my new grandchild, and I hope and I pray that it will happen in my lifetime,” he says.

Family: Married with four grown children, two sons and two daughters. He has one grandchild

Something you might expect: He loves to play golf

Something that might surprise: He took a pay cut to join Moët Hennessy 10 years ago, lured by the prospect of working with some of world’s best-known luxury drinks brands.