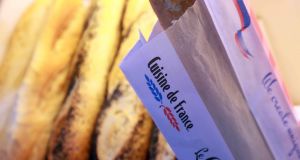 In 1997, with Owen Killian as number two, IAWS charted its rise by buying Cuisine De France and reinventing itself as a convenience food business. Photograph: Nick Bradshaw

The departure of Aryzta’s long-standing boss Owen Killian, the man credited with transforming an ailing Irish agricultural business into an international food group, had been on the cards.

Last month’s profit warning, capping a sequence of missed earnings targets, had sent shares to an eight-year low of €28 and wiped more than a €1 billion off the value of the company. It proved the last straw for investors.

Chairman Gary McGann, installed in December to steady the ship having previously led a turnaround of Smurfit Kappa, had been out trying to convince shareholders he could get the business back on track when news of the latest reversal broke.

“McGann listens to investors and I’m sure he heard the same from everyone: get rid of the CEO and stop the Picard adventure,” said Urs Beck, a fund manager at EFG Asset Management in Zurich, who manages 65 million Swiss francs, including a holding of Aryzta shares.

Either way, the departure of Killian, chief financial officer Patrick McEniff and John Yamin, head of the Americas business, represents a major clear-out at the top of the company and the share price jumped in response.

The company has been in a funk for nearly two years, principally because of a downturn in its US business and an ill-fated investment in the French frozen-food retailer Picard.

The US operation, amassed through a series of high-profile acquisitions, had been struggling with overcapacity as a result of reduced contract sizes linked to a downturn in the US quick-serve sector.

The company tried to fill the gap by directly marketing its baked goods, cookies and breads directly to customers through its Otis Spunkmeyer and La Brea subsidiaries. However, this put it in direct competition with other clients, who had outsourced their baking to Aryzta. In retaliation, several of these clients pulled their business, resulting in a sequence of missed revenue targets.

The €447 million paid for a 49 per cent stake in Picard in 2015 also riled investors, with analysts viewing it as expensive and a bad fit for the company.

“Aryzta has all but conceded this by opening up talks with Lion Capital, which owns 51 per cent of Picard, to decide what to do with its stake,” said Jean-Philippe Bertschy, an analyst at Bank Vontobel.

“It’s a tricky situation for Aryzta, because Lion Capital knows they’re in a weak position. All options are on the table, from selling 100 per cent or selling its stake at a lower price, or an IPO.”

Investec’s Ian Hunter believes Aryzta will be lucky to retrieve €350 million of its original investment, based on a €580-€680 million valuation of the French company. Nonetheless, the sale will strengthen the company’s balance sheet as it attempts to refinance €600 million of loans.

“Net proceeds of any transaction which may monetise Aryzta’s interest in Picard would be used to strengthen the Aryzta group’s balance sheet,” the company said.

Aryzta also used Tuesday’s announcement to signal an increase in its “covenant headroom” – effectively its debt to earnings ratio – perhaps indicating a steeper-than-expected fall in earnings. Conversely, the move could be aimed at giving the company greater financial flexibility as it recalibrates various operations in the US and Europe.

The drag on earnings in the US hasn’t been helped by two recent reversals in Europe tied to the loss of a contract with the Swiss Co-op chain and Brexit, with sterling’s weakness damaging UK sales.

Killian’s departure marks a rupture with the past. He was there at the start when it was little more that a mishmash of struggling fertiliser and feed businesses, then known as the Irish Agriculture Wholesale Society (IAWS).

In 1997, with Killian as number two, IAWS signalled a change in direction by buying Cuisine De France and reinventing itself as a convenience food business.

Cuisine De France’s par-baked concept tapped into a new trend in the market. IAWS paid a hefty IR50 million (€64 million ) for the franchise but only after other potential buyers, including Greencore, had baulked at the price.

The revenue generated by Cuisine De France funded later acquisitions of Delice de France in 1999, La Brea Bakery in 2001, Groupe Hubert in 2005 and Otis Spunkmeyer in 2006, as well as an eventual tie-up with coffee and doughnut chain Tim Hortons.

Killian took over as chief executive in 2003, and spearheaded a tie-up with Swiss group Hiestand, which formed Aryzta in 2008, a company that went on to become a world leader in pre-baked bakery goods with annual turnover of €3.8 billion.

The rapid expansion of the business primarily through acquisitions may have ultimately left the company more vulnerable to reversals.

The market mood wasn’t helped by Killian’s sale of €16.8 million of shares – two-thirds of stake – last March, a move forced upon him as the stock, held as collateral against personal borrowings, plunged.

The media shy executive has always extolled the virtues of staying relevant in business but it seems shareholders no longer view him as such.

The company said it will hire an international recruiting company to replace the departing executives, and appointed three chief operating officers to run the business for now.

Investec’s Hunter says a big problem is the potential vacuum left by the departure of Killian and the other two senior executives, at a time when the company desperately needs to revive its B2C business in North America, fill its capacity in Europe and negotiate a credible exit from its Picard venture.