Strong Roots set to launch in over 3,000 stores in US 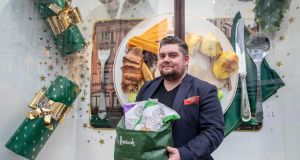 Fast-growing Irish food company Strong Roots is now being stocked by all the major UK grocery retailers. And it expects to almost double the number of stores its goods are sold in globally with its launch in the United States later this year.

The company, which specialises in healthy frozen vegetable products such as kale-and-quinoa burgers, roasted beetroot wedges and sweet potato fries, has agreed deals with three major US chains to distribute its goods at more than 3,000 stores from May.

The move comes just after the company secured listings for its products with Asda and Sainsbury’s. Strong Roots, which was established by Dubliner Sam Dennigan in 2015, had already secured listings with Waitrose, Morrisons and Tesco. It also does significant business with Iceland.

The additional listings mean its products are now stocked by all leading grocery retailers (outside the German discounters Lidl and Aldi), in both Britain and Ireland.

Mr Dennigan said the company’s products are currently available in about 4,000 stores globally with eight million packs sold since Strong Roots was established. Half of this total was sold last year.

While its main markets currently are Britain and Ireland, the group’s products are also available in Singapore, Iceland, the United Arab Emirates, Bahrain and Qatar.

Mr Dennigan, a former EY Entrepreneur of the Year finalist, said the company was seeing huge growth based on a growing interest from consumers in healthy foods.

“Overall we recorded compound annual growth rates (CAGR) of 100 per cent last year but in the UK it was 450 per cent due to us doing a lot of work to get all the leading retailers on board,” he said.

Strong Roots is anticipating revenues of about €20 million this year, growing to €100 million by the end of 2022.

Mr Dennigan, who is to relocate to Brooklyn later this year to oversee the company’s US launch, said Strong Roots was initially targeting consumers in the Mid-Atlantic region, which includes the states of New York, New Jersey, Pennsylvania, Delaware, Maryland, Washington DC, Virginia, and West Virginia.

The company, which is aiming to increase employee numbers to 35 from its current 25 in the coming months, is also still anticipating plenty of growth in the UK despite Brexit.

“We got our first listing with Waitrose, which led to our entry into the market, the day after the Brexit vote was announced, so we’ve planned with that in mind since day one,” Mr Dennigan said.

“It has cost us a lot already but there are some opportunities for us, not least if there is an issue bringing fresh produce into Britain.

“People are now so focused on health and wellness that they are not likely to revert back to cheaper poor quality foods no matter what happens. Consumers are looking for good value and quality and our range of products feed into that,” he added.