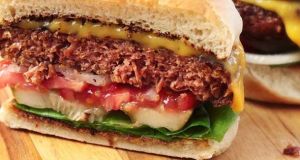 A plant-based burger that “bleeds” when cooked has gone on sale in Ireland.

Tesco Ireland confirmed it is now stocking the Beyond Burger product, developed by US cult brand Beyond Meat, which claims to be the nearest thing yet to a real beef burger.

The vegetarian patty is made from pea protein, coconut oil and potato starch. It uses beetroot juice to mimic the bleeding of a traditional burger.

“The Beyond Burger is the world’s first plant-based burger that looks, cooks, and tastes like a fresh beef burger,” Tesco Ireland said, noting the product also did not contain GMOs, soy or gluten.

With more people choosing to eat less meat for health and environmental reasons, there has been a proliferation of companies offering vegan alternatives to popular meat products.

Beyond Meat, which lists Microsoft founder Bill Gates and actor Leonardo DiCaprio among its initial backers, claims to have broken the mould in developing meat substitutes.

Unlike “lab-grown” meats in development elsewhere, the company uses certain naturally occurring molecules to mimic the texture and taste of real meat.

It has sold sold 13 million burgers since its 2016 debut and last year said it was having trouble meeting demand after US multiple Whole Foods stores ran out of supplies.

Tesco is aiming to tap into the growing vegan market in Ireland with the launch of the vegan burger.

“In response to growing customer demand, we’ve expanded our range to include more variety in vegan, vegetarian and flexitarian foods from an array of different suppliers,” Tesco Ireland commercial director Joe Manning said. It is selling the vegan burgers at €7 for a pack of two.

The retailer’s move comes in the wake of major report in the Lancet Medical Journal, which advocated a massive reduction in red meat consumption in western countries of up to 90 per cent as a means of addressing the current climate change problem and the global epidemic of obesity.

Ireland is the fourth biggest beef exporter in the world and beef is the single biggest component of the State’s €12 billion food and drink export business.

The proliferation of substitute meat products poses a serious threat to that trade and US beef manufacturers recently filed a petition to exclude non-animal products from the definition of meat.