Starbucks tries to win over Italians with coffee and pizza

At €1.80 for a simple espresso at its first outlet in Italy, Starbucks will charge nearly double what Italians pay at their local bars 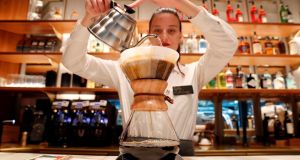 Starbuck’s new flagship store in Milan Italy: The Seattle firm will have to pull out all the stops to impress Italians who have long said “no” to takeaway coffee

Starbucks, the world’s biggest coffee chain, will realise its chairman’s dream on Friday when it opens an upmarket roastery and cafe in Milan, but the test will be to convince coffee-obsessed Italians to pay more for their daily espresso.

The store will be the Seattle-based giant’s first foray into the Italian market, the world’s fourth-largest consumer of coffee, and comes 35 years after chairman emeritus Howard Schultz visited the country and was inspired to set up his own cafe chain.

The venue features a green industrial-scale roaster, marble counters, brass engravings - and a price that could make many Italians reluctant to make it their regular cafe.

At €1.80 for a simple espresso, Starbucks will charge nearly double what Italians pay at their local bars.

“The price reflects the premium experience we will offer customers,” Starbucks Global President of Retail, John Culver, told Reuters as he showed media through the store, built inside an elegant, century-old palazzo which the company renovated.

“Once they enter the space our customers will understand exactly what that premium experience is going to be.”

Coffee chains are having to up their game as big money flocks to one of the few fast-growing areas of the drinks market. Coca-Cola agreed to buy Costa, the world’s second-biggest coffee chain, last week, while drinks group JAB snapped up Britain’s Pret A Manger in May.

Schultz has said he was inspired to develop Starbucks, which now spans almost 29,000 stores worldwide, during a 1983 visit to Italy where he was struck by the rapport between baristas and their clients.

As in Seattle and in Shanghai, where Starbucks has opened its other two high-end Roasteries, the Milan store is designed as a playground for coffee drinkers, serving it in more than 100 different ways and showcasing the roasting and brewing process.

The 2,300-square-metre store will also offer cocktails, catering for the Italian evening tradition of aperitivo.

Starbucks said it would start rolling out regular cafes across Italy this year - a move that will bring it into closer competition with Italy’s more than 57,000 cafes.

No other Western country has as many, according to market research provider Euromonitor International.

“The Starbucks model and the economic sustainability of their stores are built on a price of its flagship products - cappuccino, espresso, frappuccino - which is very far from the average price in the Italian bars,” said Marco Eccheli, Director at consulting firm AlixPartners in Italy.

Starbucks will find it hard to become an everyday choice for Italians, but is likely to attract customers looking for a more complete experience, particularly younger people, he said.

The U.S. group will open four traditional cafes in Milan with its local partner Antonio Percassi by the end of this year.

Federico Castelmare, 55, the barista of one cafe near the new Starbucks cafe said its higher price would not allow him to charge customers more.

“I expect my clients to be faithful to me, but tourists will surely go to the roastery.” – Reuters