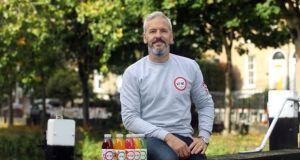 Vithit managing director and founder Gary Lavin: The drink is stocked by leading British retailers such as Tesco, Sainsburys, Boots and WH Smith

Vithit, the fast-growing vitamin drink manufacturer established by Dubliner Gary Lavin, is aiming for revenues of €40 million this year on the back of a huge surge in growth in Britain as more consumers switch to healthier brands.

The company, which is seeking to become the leading healthy soft drink producer globally within five years, is expecting to sell 20 million units in 2018, with a predicted 38 per cent growth in market share in Britain alone.

Founded in 2008 by Mr Lavin, Vithit is a blend of teas, juices, water and vitamins that comes in a number of flavours including apple & elderflower and dragonfruit & yuzu.

The range is the second best-selling healthy drink brand in Britain in the so-called “functional beverage” category, which covers soft drinks that purport to have health benefits. It expects to overtake the Coca-Cola-owned Glacéau Vitamin Water brand within the next 12 months.

Vithit, which is stocked by leading British retailers such as Tesco, Sainsburys, Boots and WH Smith, recorded a 64 per cent jump in sales in the market last year.

Mr Lavin, a former professional rugby player who turned to business after being forced to retire through injury, said some British retailers are currently selling over 160 units weekly at individual stores.

Mr Lavin said the company’s success was largely as a result of consumers turning away from sugary soft drinks towards healthier brands.

“When I was creating Vithit, I sought to add in as much goodness and as little sugar as possible and to make it so that people could make an easy switch,” he told The Irish Times. “I’m no genius. It is just that I always knew sugar was bad for people and, from day one, wanted a product that looked and tasted so great that it could compete with the well-known sugary brands out there.”

As well as reporting strong growth in the UK, Vithit is the market leading health drink in Ireland and Iceland, and the fastest growing in Belgium. The brand is also selling well in a number of other markets, including Spain, Portugal, Netherlands and Norway.

Self-funded to date, Vithit is looking to grow the number of international markets it operates in to 15 this year by breaking into both Australia and the UAE by the end of 2018. It aims to be in 50 markets globally within five years.

Vithit last year signed a $20 million distribution deal with Honickman Group, a distributor of Snapple and Canada Dry in the United States. A recent trial with PepsiCo bottling in West Virginia has also opened the door for further distribution there.

Mr Lavin said the company was doing well in some states but wasn’t yet available across the US, a situation he aims to address in the coming years.

“You have to be very careful in the US because it can become expensive. Our real growth currently is in Europe, with Ireland, UK and Belgium our top markets. By moving into the southern hemisphere, we’re ensuring that business is consistent all-year round, rather than just in the summer months.

In November, the company’s drinks will be made available in 600 Coles stores in Australia. In addition, it has recently launched in Dubai Duty Free, in what is the world’s largest airport.

1 Basic income for all: Has the Covid crisis given us a new economic model?
2 ‘I don’t need to do any of this. . .I don’t actually need to work.’
3 Direct sea routes to Europe offer certainty in choppy Brexit waters
4 Promontoria barred from pursuing doctor over Ulster Bank loan
5 How long can Government afford to keep State pension age at 66?
6 Only way is up for Stripe as valuation skyrockets
7 Pandemic brings a halt to Zara-owner’s Irish expansion
8 ‘Make plans but don’t hold on to them too seriously’
9 How to gift your child a house deposit . . . tax free
10 Unilever’s Dutch and British arms merge after 90 years ahead of Brexit
Real news has value SUBSCRIBE