Sanitisers and screens order of the day as some pubs reopen 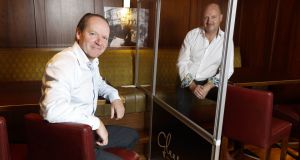 The partial reopening of pubs from Monday brings opportunity, but will also introduce an onerous responsibility on them to ensure new health guidelines are properly enforced, according to the Vintners’ Federation of Ireland (VFI).

Pubs serving food are allowed to trade and to sell alcohol so long as a meal worth €9 is served.

Customers will see changes to their locals, including hand sanitisers, screens between tables and safety signs. Some have also introduced temperature checking as customers enter the pub.

According to VFI chief executive Padraig Cribben: “There is a pent-up public demand to return to the pub, mixed with some natural anxiety, but we’re hopeful the considerable time and money spent by publicans ensuring their premises are as safe as possible will reassure the public that hospitality remains at the heart of our pubs.

“While the introduction of the one-metre distancing rule will make a substantial difference to our members’ ability to trade, there remains many challenges within the guidelines for publicans to surmount. The 105-minute ‘sitting time’, for instance, is a directive our members must implement, but when it comes to policing the rule they are left to their own devices.”