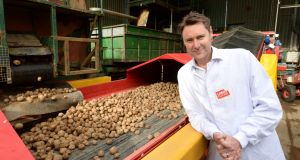 Revenues at the company behind Tayto, one of Ireland’s best known brands, last year increased to over €100 million.

According to new accounts filed by Tayto Snacks’ German parent, Intersnack, revenues at Tayto Snacks in Ireland increased by 1.3 per cent from €99.3 million to €100.6 million in 2019.

Brand business for potato chips and other products under the Tayto, Hunky Dorys and Pom Bear brands “demonstrated robust growth year on year”.

Profits for the Irish operation are not revealed in the group accounts.

Tayto Snacks is the leading snack-food manufacturer and distributor in Ireland, buying 10 per cent of the national potato crop with most potatoes sourced in Co Meath and Co Dublin.

The company employs 500 people based at its 80,000 sq ft factory in Ashbourne, Co Meath.

Tayto Snacks has been part of the Intersnack Group since 2007 and here produces brands including Tayto, Hunky Dorys, King, Perri and Velvet Crunch.

According to Tayto Snacks, the brands have a leading market position representing an almost 50 per cent share of the Irish snack-food market.

The performance of the Tayto brand here contributed to Intersnack almost doubling its post tax profits to €62.2 million last year, as revenues topped €2.26 billion - the highest ever recorded by the group.

The group operates 36 production facilities in Europe and Asia.

The group’s largest market is the UK where revenues of €537.3 million were recorded, with sales increasing by 14.8 per cent.

The directors said the group enjoyed organic growth in revenues of 2.9 per cent, with the forecast of revenue growth in the upper single digit percentage range not being fully met.

On the outlook for 2020, the directors said uncertainty prevails concerning the effects of the Covid 19 pandemic and Brexit on the business.