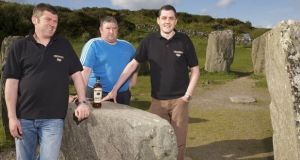 Founded in 2008, by Mr O’Connell and childhood friends, Ger and Denis McCarthy at the back of a house in Union Hall, WSD is now one of the largest, wholly Irish-owned distilleries in the State with a distillation capacity of 4 million litres of pure alcohol.

Its products, which include Garnish Island Gin, are sold in almost 70 countries. Its other brands include a gin sold under the name of BBC star Graham Norton and a whiskey developed on behalf of the band the Pogues.

WSD bought out the majority stake in the business held by the UK-based Halewood group for about €18 million last year. The company, whose backers include include the Ireland Strategic Investment Fund, employs more than 100 people at its Skibberean-based distillery.

Mr O’Connell told The Irish Times, he hadn’t expected to win the award, particularly as the company had gone its own way rather than following other drinks producers.

“This is a huge win for us and an acknowledgement of all the work we’ve done over the years. I’m hoping it will bring some good publicity our way,” he said.

Mr O’Connell added he also hoped that it might bring some solace to companies that are facing tough times due to the Covid crisis.

“We’ve been through our fair share of hard times and I hope other businesses can see that there is light at the end of the tunnel,” he said.