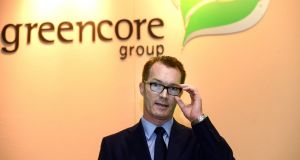 Greencore chief executive Patrick Coveney said the company was “absolutely smashed” by the first coronavirus lockdown and that it would not recover until at least 2022.

He was speaking as the London-listed group, the largest maker of pre-packed sandwiches in the UK, conducted a £90 million (€101 million) share placing to limit the financial fallout from the pandemic.

Mr Coveney said revenue from its food-to-go business had fallen by over 50 per cent at the height of the UK’s first lockdown, between April and June.

In response, the Dublin-headquartered company closed four plants, placed 4,500 staff on the UK government’s furlough scheme, cancelled its annual dividend and imposed a 30 per cent pay cut on senior staff.

He said the business had bounced back reasonably well in the third quarter and that the company had not intended to raise any additional equity, but the resurgence of virus cases in the UK and the ensuing restrictions had forced its hand.

Mr Coveney said the additional capital was needed to protect the business and avoid a further round of cuts, which would damage its ability to recover when the situation improves.

“The additional £90 million gives us a lot more headroom for downside Covid scenarios,” he said, suggesting the company was now in a position to trade through a third, fourth and fifth lockdown should they arise.

In annual results published on Monday, the company said it had secured amendments on near-term covenant conditions, extended the maturity on a £75 million revolving credit facility to March 2023 and refinanced a £50 million bilateral loan in a bid to shore up its balance sheet while the crisis persists.

As of the end of September, the group’s net debt stood at £350 million.

Mr Coveney, who is personally taking £400,000 of the new share issuance, said he had no intention of quitting the food group after 13 years in the job, despite presiding over a sequence of recent crises, starting with the company’s abrupt exit from the US market in 2018.

“We had navigated the reset of our strategy for the business post the US exit pretty well,” he said, and while Covid-19 had exacted a heavy toll, “it would be very hard to blame Greencore or its board or management” for that.

He said the retail part of the UK’s food market was not expected to recover to 2019 levels until 2022 at the earliest.

However, Greencore’s business was in a better position than most, he said, as it was spread across several segments of the food-to-go market, including the suburban retail network, which was showing signs of recovery, and not just the worst-hit city-centre areas.

He also noted that the company had secured £75 million worth of contracts from rival food-to-go business Adelie, which went bust in July.

A no-deal Brexit and the imposition of tariffs on trade would inevitably entail a price hike of some sort, Mr Coveney said, but he didn’t believe it would be “materially significant”.

Greencore imports about £700 million worth of packaging and raw materials each year, and tariffs on these items will translate into price inflation. While it is not certain, a Brexit deal was the most likely outcome, he said.