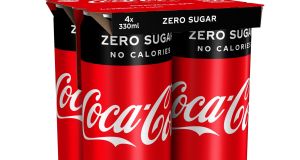 Coca-Cola Ireland has introduced more sustainable cardboard packaging for its multipack cans which, it says, will remove 200 tonnes of “shrink wrap plastic” from the business annually.

The Irish arm of the drinks giant said the new KeelClip packaging was now in use on all four, six and eight multipack cans in the Coca-Cola portfolio.

As part of its move to a more sustainable packaging strategy, the company is also switching its green Sprite bottle to a clear one to make it easier to recycle. The green colour had made it harder for the bottles to be recycled back into clear bottles through conventional recycling.

As part of its World Without Waste sustainability campaign, Coca-Cola has pledged to collect and recycle the equivalent of 100 per cent of its packaging worldwide, and manufacture its bottles using at least 50 per cent recycled plastic by 2030.

This involves an ambitious goal of setting up collect and recycling facilities in more than 200 countries where it sells drinks.

“Despite this unpredictable year as a system we have remained focused on achieving our ambition of a World Without Waste,” said Coca-Cola Ireland manager Petre Sandru. “Central to this is our investment in more sustainable packaging design, and ensuring our products are as easy to recycle as possible.”

Plastic packaging has become a major battleground in the fight for more sustainable production systems. Miles Karemacher, general manager of Coca-Cola Hellenic Bottling Company (HBC) Ireland and Northern Ireland, said 45 per cent of the brand’s total plastic portfolio was made of recycled materials, which has eliminated the need for 3,450 tonnes of new plastic each year.

“We have also reduced the plastic used in our bottles by 10 per cent since 2018, saving 1,000 tonnes of plastic annually,” he said.

The company behind Ribena, Suntory Beverage and Food Ireland, also recently redesigned its bottle to make it fully recyclable in a bid to cut down on plastic waste.