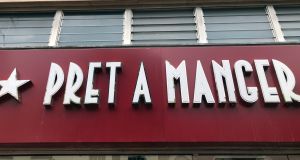 The coffee and sandwich chain has axed 2,800 roles from its shops after completing a restructuring of its UK business. Photograph: Steve Parsons/PA Wire

UK sandwich chain Pret A Manger has said it will cut 2,890 jobs, or almost a third of its workforce, as it reshapes its business after a steep drop in demand for its takeaway food in the pandemic.

The company, owned by the Luxembourg-based consumer goods group JAB Holdings, said on Thursday that its UK staff numbers would fall to 6,000 after sales dropped to the levels of a decade ago, “when the business was considerably smaller”.

It said the job losses reflected “shorter opening hours, lower transaction levels and the losses faced by the business in 2020”.

Pano Christou, chief executive, said: “I’m gutted that we’ve had to lose so many colleagues. Although we’re now starting to see a steady but slow recovery, the pandemic has taken away almost a decade of growth at Pret.”

Until the pandemic, Pret had been expanding as commuters snapped up its coffee, sandwiches and salads from almost 400 UK stores and more than 100 overseas.

It is one of several businesses catering to the commuter trade that has found its customer base drastically reduced as millions of people switched to working from home. Last month, it said it would undertake a “significant restructuring” and expected that it would have to cut about 1,000 jobs.

In July, the travel food retailer SSP said that it planned to cut 5,000 jobs, while Itsu, the Asian takeaway chain, plans to undertake a company voluntary arrangement – a form of insolvency process – that will allow it to cut rents at 53 of its 77 sites. Pret’s main rival Greggs has so far avoided job losses but has cut its store opening plans.

Restaurant and café businesses in central London, where Pret had some of its most profitable stores, have been among the worst hit, with office workers reluctant to take the Tube.

Trade in Pret’s UK stores remains about 60 per cent below last year’s levels, the company said, or about £5 million (€5.6 million) a week of sales, with weekly sales growing about 7 per cent on average since the end of July.

Thousands of Pret staff have agreed to accept lower minimum weekly hours, saving the company from slashing another 1,000 roles.

The jobs to be cut include 2,800 in stores and another 90 in the company’s head office, far higher than the company had signalled in July. The number of UK stores will fall to 367.

Pret in May called in the advisory firms Alvarez & Marsal and CWM to overhaul its business model, after turning to its banks for €100 million of emergency funding a month earlier.

It is also in talks with landlords after slashing rent payments – in June it paid 30 per cent of its quarterly rent bill.