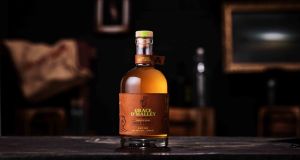 Grace O’Malley includes a Captains and a Crews range

The company is also planning to open a maturation house in Co Mayo in two years as it looks to become one of the larger whiskey stock owners in the Republic within a decade.

“The vision is to have a bonded warehouse with a visitor centre concept that is overlooking the sea on the Wild Atlantic Way,” said Mr Cope, who spent seven years as principle shareholder and 15 years as managing director at Lir Chocolates.

The businessman has teamed up with other investors for the Grace O’Malley brand, which has developed a number of whiskies that pay homage to the 16th century Irish pirate queen.

Other backers include Berlin-based entrepreneurs Stefan Hansen and Hendrick Melle, who have taken a majority stake in the new business through their company Private Pier Industries, which is behind a premium Irish pet food brand that is sold in 3,000 stores in Germany.

Officially launching next month, Grace O’Malley is already being stocked in a number of bars and specialist shops in the Republic.

The brand includes a “Captains” range of premium products and a “Crew” range of entry level whiskeys priced from €35, a Heather-infused Irish gin and a golden rum. The Captains range will include 10- to 18-year-old whiskies that have been finished in specially selected casks, ranging from amarone to cognac.

The company has secured a large supply of stock from the John Teeling-owned Great Northern Distillery and brought in Paul Caris, cellar master and blender at French company Alteroak to oversee maturation and finishing of the spirits.

“We’re not a distiller and we are not trying to be. That isn’t what we are about. Our whiskey comes from Great Northern and we’re very proud of that as we see them as specialist at what they do,” said Mr Cope.

“With as much as 80 per cent of the taste of whiskey coming from the barrel its clear that the real magic comes from the maturation and finishing. So we don’t have to be experts at making whiskey. What we have be good at is buying good supplies from people who know what they are doing and having the right blender and maturation specialist to turn it into something really special,” he added.

Mr Cope said the company has “well over a €1 million” of stock sitting in Great Northern currently.

“There are deals going on at the moment to substantially increase that with letters of intent signed,” he added.

Irish whiskey is currently the fastest growing premium spirit in the world with sales growing at more than 10 per cent a year in more than 75 countries.

Mr Cope noted the popularity of whiskey but dismissed concerns that there are too many companies now focused on it.

“Some 26 per cent of the world’s whiskies come from Scotland and that is worth a combined £5 billion (€5.8 billion). We are at about 10 per cent of where scotch is currently. In addition, we’re at something like 22 distilleries open in Ireland, whereas 30 opened in Scotland in the last three years alone. There are plenty of opportunities for growth for Irish whiskey,” he said.