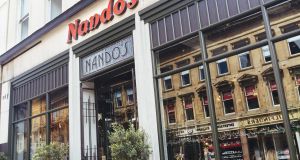 Nando’s, the UK-based restaurant chain, plans to trial feeding chickens algae and insects as part of efforts to sharply reduce its carbon emissions over the next decade.

The casual dining brand, which operates 930 outlets worldwide, will look at alternative sources of chicken feed to reduce its reliance on soy, which is the second biggest contributor to global deforestation after the beef industry.

The plan is part of a range of measures Nando’s will announce on Monday to cut direct carbon emissions from the business to zero and halve the carbon footprint of the average meal in its restaurants by 2030.

“We are launching ambitious new commitments which will set a strong example for what our industry can do to make a genuine difference,” said Colin Hill, chief executive of Nando’s UK and Ireland.

He added that Nando’s would be the first in the restaurant sector to combine improvements in environmental sustainability with animal welfare - something which is typically difficult to achieve as higher welfare animals live longer and therefore consume more feed, increasing their overall carbon footprint.

The push comes as companies and investors increasingly focus efforts and funding on more sustainable practices, despite the economic fallout from the pandemic. The chicken industry has been a particular focus from environmental campaigners because of the intensive nature of its farming practices.

“It’s a highly concentrated, highly industrialised industry. I wouldn’t say it’s the central focus of the market but we are progressively seeing a greater market involvement in the sustainability agenda,” said Clive Black, an analyst at Shore Capital.

Greenpeace, which last year released a report titled “Winging It: How the UK’s chicken habit is fuelling the climate and nature emergency”, is calling for businesses to halve the amount of meat they sell by 2025.

About 78 million chickens were slaughtered last month in the UK, according to government statistics, a decline of 2.1 per cent on the same period last year as increasing numbers of consumers turn to meat alternatives.

Last week, the fast-food chain KFC announced it was working in collaboration with a Russian laboratory on the first 3D printed chicken nugget.

Other ways Nando’s is looking at reducing the carbon impact of chicken feed include changing to a more sustainable method of wheat production, known as agro-ecological growing, and sourcing more sustainable soy.

It is also planning to increase its range of vegan options, use slower growing - and therefore healthier - chickens and source all of its gas from renewable sources by 2022.

Nando’s said that menu prices would not increase as a result of the changes, nor would it switch any of its suppliers. According to its most recent set of accounts, the company made £42 million operating profit on sales of £1 billion in the year to the end of February 2019.

Mr Black said that Nando’s commitments were laudable but risky: “Sustainability means less intensity and that tends to mean a higher cost base in a very competitive food and beverage industry, particularly one that has had its legs taken away by coronavirus.”